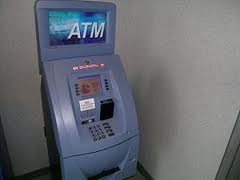 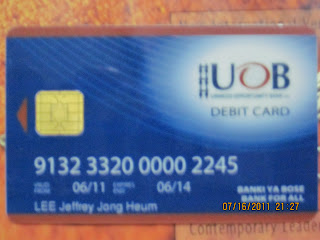 UOB has pledged to roll out its 2-year e-Wallet strategies over 2011 and 2012. Its e-Wallet strategies has five components: Debit card, ATMs, POS devices, mobile banking and agency banking.
Today, two of these five components have been implemented, at least partially. The launch has been extremely quietly fast compared to the way all other commercial banks have been doing. It would not have been made possible without God's special grace and UOB IT team's dedication. Praise the Lord!
UOB has designed its first debit card and named it UOB Grace Card. It was named so in hopes that all users may experience God's grace. It is a smart card with a chip in it. It has been distributed to UOB senior leadership for testing. It will then be distributed to all UOB staff and eventually to clients over time.
UOB has received three ATMs and has been testing them for some time. It needs to be connected to the national payment switch, called RSwitch operated by SIMTEL, to be inter-operative with other bank ATMs. But RSwitch has experienced quite a number of issues in implementing the inter-operative connectivity among all financial institutions. After a long hassle, however, UOB ATMs have gone live today! Praise the Lord!
Thus, UOB has become the first and only micro finance bank in Rwanda that has its ATMs that are connected to the RSwitch.
Debit cards are still a symbol of wealth and status in Rwanda. Now we are planning to distribute these cards to the poor. I trust these cards will boost the dignity of the poor tremendously. Also, they may access the cash more easily and conveniently through ATMs, in addition to physical access to branches or cash distribution by UOB lending staff.
Now we will be working on developing mobile and agency banking solutions to make the cash access by rural clients really easy and convenient. We plan to test the mobile banking solution in September and begin the first batch of agents by December 2011.
May we continue to receive your favor, Lord! - Jeffrey
Posted by jlee80111 at 6:26 AM