Kris and I visited Rwanda in April 2008. The purpose was to be assured that the Lord was indeed leading us to Rwanda for my spiritual life tithing. From this trip, we both received the assurance. How?

It was through conviction, primarily that God may use our life and professional experiences in both the U.S. and S. Korea to help Rwanda improve their living standards and health care. Rwanda wants to be the Singapore or S. Korea in Africa and I tend to believe they can as long as they continue their current system and efforts. I will tell you a little more about it a future blog post.

Rwanda used to be a francophone country. After the genocide, however, she is turning to become an anglophone country, promoting the use of English for all business, government, and even schools. The ties between Rwanda and the U.S. as well as S. Korea are solidifying and many resources are flooding into this tiny country. But unlike other African countries, they refuse to receive simple aids. Instead they invite investments and partnership. Unusual. Moreover, Rwanda is probably the only country in Africa where the government declared a war against corruption and it is indeed being implemented as such. I talked to many NGO leaders and none has been asked for a bribe. Another unusual reality for an African country.

Rwanda is getting a lot of attention from the international community for their incredible efforts to promoting healing and reconciliation through forgiving those who killed their families and friends. This has been made possible because of the love demonstrated through the life and death of Jesus Christ, our Lord. Rev. Rick Warren is one of the strong supporters of this small country, a little bigger than a quarter of S. Korea. 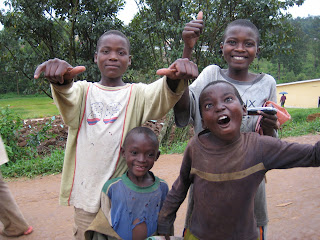 I miss the people of Rwanda. I look forward to living and working in this country with its people. They look somewhat sad and hurt, but they are not buried in the past. Instead, they look forward to the future in hope being preached on the piles of bones still being dug out from the 1994 genocide. Look at the bright smiles of these young boys! They are the future! And I bet part of my life on them. Praise the Lord for his incredible grace on these people! - Jeffrey
Posted by jlee80111 at 10:22 PM No comments:

It is now real... to head out to Rwanda

Friends, now it is real that we are heading out to Rwanda. The schedule has been set that we take off Denver on January 27 and New York on January 30. We are working diligently to prepare for the timely departure, but a lot has to be finished before we can leave.

Kris still has to close down her health care management business and I have yet to complete my tenure with the bank. Meanwhile we will be shipping our household stuff in November and I will be traveling quite a bit before we can set out. I have not even made announcements to the bank colleagues and customers. I am planning to do it before December.

At times it looks overwhelming, but knowing that we are in the good hands of our Lord Jesus, we feel in peace.

Pray for us so that we may be well prepared before we leave. - Jeffrey
Posted by jlee80111 at 3:59 AM No comments: