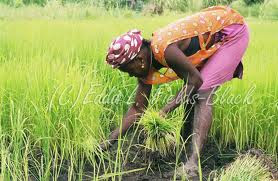 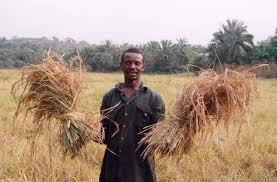 In Rwanda, approximately 90% of its population is related to agriculture, directly or indirectly. Agriculture is essential to Rwandans. Rwanda's traditional main staple has been cassava, beans and bananas. Rice has become one of the government's strategic crops and its consumption has been on the rise. Currently, Rwanda is importing 90% of its rice needs in the country, primarily from Tanzania.
Thus, UOB has pledged to provide agricultural finance and rural savings for rice and maize (another crop of growing demand) farmers. For the past year or so, we have tried to make agricultural finance for rice and maize farmers without much success. The low success rate was partly because the Rwandan government's last minute breach of its covenants and intervention that did not require an agricultural finance.
It happened again a few weeks ago with the rice farmers in Rwamagana.
So I decided to make a trip myself to meet with the leadership of TWIBUMBE, a union of 11 rice cooperatives governing approximately 2,200 rice farmers. TWIBUMBE means "united." The primary purpose of the meeting was to see how we can begin the initial relationship.
Initially the meeting was going well, but we realized we came to impasse at a point because the union leadership was unwilling to agree on what is a common practice in banking: directing the sales proceeds to the bank for the purpose of controlling the funds flow. We already made a few concessions during the meeting, but we could not make concession on this issue.
After 3 hours of frustrating meeting, we had to leave the meeting with the union chairman's promise to deliberate the issue at its board meeting in the afternoon. We felt disappointed, but we could not concede on all issues.
Agricultural finance is of high risk without collateral and adequate compensation or risk mitigation, at least in Rwanda. That is why all commercial banks are shy away from agricultural finance. We made a pledge to agricultural finance based on the mandate to serve the under-served, but we could not compromise too much on the principle of stewardship.
On the way back, we prayed together for God's intervention so that the leadership may have clarity in their thinking. We have seen and heard so many stories where the cooperative and/or union leadership has caused many harms to the members (farmers) because of their irrational decision. We had many farmers at stake.
At 7:40PM, I received a phone call from Agricultural Finance Officer, Jean de Dieu, that the union chairman called and informed him that the union board has accepted our condition. I praised the Lord with much delight in my heart! "Glory be to God!"
We are now working on providing agricultural financing for 1,200 farmers through 9 cooperatives. We pray that this will pave the way for the farmers to access more financial and educational resources going forward.
We are also talking with another rice cooperative in Kamonyi that has approximately 1,000 farmers.
Agricultural finance is clearly an un-walked path for me and UOB so we are putting our feet into the water in great faith like the Israelite priests did when they were crossing the Jordan River into the promised land. May the good Lord walk with us in this journey! - Jeffrey
Posted by jlee80111 at 5:55 AM