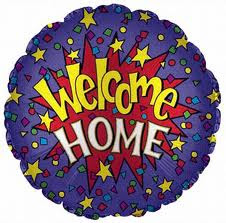 Kristin and I had a 5-week long leave that included a week-long conference, a tour to several European countries and a visit with friends and family in the U.S. Based on the number of countries visited, we visited 10 countries. Wow...

Travel is always refreshing in a sense that we get to visit new places, meet new people and see new things. This trip led us to visit many new places and see new things (many are old but new to us), making us praise the Jehovah God, the Creator of all. We also met new people of different beliefs and cultures. Some we liked, others we disliked. Nonetheless, they were new experiences, enriching our knowledge of the world.


But travel is also renewing our old memories in a sense that we get to see the same things we already know from a different perspective, thus widening our perspectives. The same is applicable to people relationships. You get to know new aspects of people, thus renewing the relationships. I admit at times the new knowledge of people worsens the relationship, but many existing relationship get enriched through learning more about them.


Overall, the annual leave for the year 2012 was filled with joy and excitements. Moreover, we found our home kept intact the way we left. Praise the Lord! Now it is time to get back to work to love and serve God and people. Welcome Home! - Jeffrey
Posted by jlee80111 at 10:47 PM No comments:

I attended HOPE Leadership Summit from May 17 through 22, which took place at Mennonite Central Center in Akron, PA.

This annual leadership invites the leadership of HOPE-led MFIs or HOPE's partner MFIs that are providing Christian micro finance in 16 developing countries around the world, to worship God together, to recharge, to refocus and to learn from each other. This year's theme was SELAH, as shown in many Pslams and Habakkuk. It means to stop and listen, to pause, to reflect, to refocus.

We tend to think that what we have been doing is what we are supposed to be doing. In reality, we may be doing what we are doing because that is what we believe we should be doing even when we may have drifted away from our own mission. When we are in the midst of doing something, we may not be able to discern what is right and wrong. In this sense, it was a good session of reflection corporately as well as individually.

In addition to the learning and fellowship, I had two other favorite findings: the Mennonite Central Committee logo and the Sights and Sound Theater Musical: Jonah.

The conference took place at the Mennonite Central Committee Welcoming Center. I like its logo very much. It shows a dove, symbolizing peace, on the front and at the tail end there is the cross. It means to me that in Christianity we must seek peace with everyone, if possible at all, and Christ should be revealed or exposed through our life style. It reminds me of someone's saying: "Evangelize always. Use the Word when necessary."

My most memorable program at the summit has always been the musical at the Sights and Sound Theater. This year, they showed Jonah. The production uses the entire theater hall as well as the stages. At one point in time, a humongous whale or fish swam around the the hall over the people's heads. It was an amazing scene that I have never seen anywhere else. The scale, the songs, the acts, the plot, and everything else were just wonderful. No wonder the tickets are sold out for months even after several months of showing at this giant theater that can house probably 1,500 people. People are coming from New York to the Lancaster County where Sights and Sound Theater is located just to watch this Christian musical. Sights and Sound Theater is where the bible comes to life and they do nothing but Christian musical. It is a God-ordained ministry. Last year, we watched Joseph and the year before we watched Psalms of David. All of them were great but this year was the pinnacle. Thank you, Lord, for the wonderful opportunity! - Jeffrey
Posted by jlee80111 at 10:04 PM No comments:

Lunch at an Amish Home in Lancaster...

While I was attending a conference in Lancaster, PA, we had an opportunity to visit an Amish home and have lunch there. The Amish home we visited belonged to Joshua and Linda who have four children. Joshua came from a family of 10 children and Linda from a family of 13. The Lancaster County is known to be the capital for Amish people.

Amish people are settled together in communities, called church districts. Each church district comprises 20-40 families and is led by a bishop and other ministers and deacons. They gather to worship every other Sunday at the home of one of the members. Amish people have church rules that are strict and strictly enforced. If anyone fails to abide by the rules and refuses to repent, he or she will be banned from the church and the community for good.
Amish people's belief centers around simple living and plain dress. Their life style looks unique to others because of the following reasons:

First, they refuse to benefit from many conveniences of modern technology, such as cars, telephones and electricity. Instead of driving automobiles, they ride horse-led buggies. Women ride two-wheeled boards with a handle, propelling it by pushing the ground with one foot.

Second, they seek peace and humility. For this reason, they refuse to conduct any military service.

Third, they do not believe in education. So their education stops at the 8th grade or 14 years of age. Our host, Joshua, explained that they do not believe they need to learn any more than their simple living requires. Moreover, their way of earning income is predominantly farming that does not require higher education, they believe. Also, they believe their children may learn something from school, which may hinder their way of living. So learning is not their necessity.

In this complicated society where we live, a simple life may be what we need, but to what extent is the question. Whatever they may feel in their hearts and think in their minds, they looked happy and healthy. The visit and their life style gave me a good opportunity to reflect our contemporary lifestyle. - Jeffrey