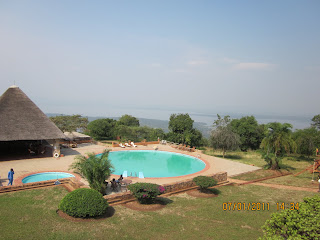 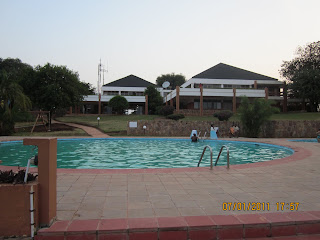 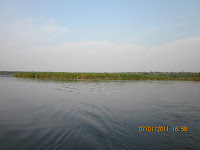 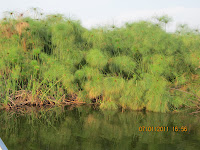 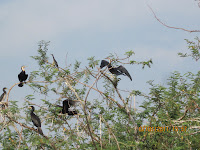 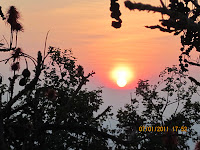 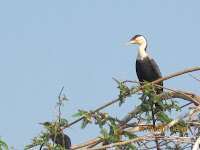 [Top to Bottom, Left to Right: 1) Akagera Lodge from swimming pool, 2) Swimming pool and Lake Ihema from Akagera Lodge, 3) The largest floating island covered with 4) papyrus trees like this, 5) A couple of fishermen putting their nets, 6) Birds nesting at a bird sanctuary island, 7) A bird resting from diving to catch fish and 8) A beautiful sunset scenery]

On July 1st and 2nd, Kristin and I made a quick trip to Akagera National Park, Rwanda's only gaming park located at the eastern end of Rwanda bordering Tanzania. Missionary Bohye Kim and Pastor Younghee Seo from S. Korea traveled with us.
It is approximately 2,500 square kilometers big, one ninth of Serengeti National Park in Tanzania and five times larger than Ngorongoro Crater National Park in Tanzania. It has several lakes inside the park, including Lake Ihema, the second largest in Rwanda, after Lake Kivu.
It was a short trip, but we drove around the southern part of the park to watch some animals and in the afternoon we took the boat riding to see some crocodiles, birds and hipos. The lake was so tranquil as the surface was so smooth like a glass. At one point, Roger, the boatman, turned off the boat engine. It was so quiet, free of any noises but chirping sounds of birds. It was heavenly.
We had the privilege of the company of Bryan Havemann, the park manager, for our boating trip. He explained that Akagera has tremendous potential as a game park. It does not have too many animals at present, but it used to have over 300 lions and quite a few black rhinos, thus having all big fives. (lion, rhino, leopard, elephant and buffalo) But now, the park does not have lions and black rhinos. They were all killed during the war by soldiers and by poachers over time. Bryan explained, however, that the park has more than 110 elephants and many other animals and that the park has started fencing up the park to bring back lions and black rhinos within a year. Also, the park is well known for 500 species of birds that it has.
The absolute number of animals needs to increase, he admitted, to be considered one of better game parks in Africa, but many actions are currently under way and he is optimistic about the progress to be made to be recognized as a good game park within several years. He used to be a senior ranger at the Kruger National Park in South Africa and has accepted the offer to run the Akagera National Park in hopes of being part of the remarkably fast transforming Rwandan economy and tourism, like many others who share the sentiment.
Not too many game parks have lakes that Akagera has. Lake Ihema, located inside the park, has 35 species of fish. With ample algae, fish have plenty of food. Inside the lake, there are many crocodiles some of which are as long as the boat we were riding, approximately 4-foot long. Also there are a few floating islands that are covered with papyrus trees. We took a boat to see the islands and we found them amazing. The largest one was 100 meter wide and 200 meter long. I did not dare to step on it but I heard that its floor is soft and cushy. It floats within the lake as the wind blows.
Also we saw a bird sanctuary where komorans, herons, and other birds were nesting. Both crocodiles and these birds would not be around without ample fish around them.
We were lucky to capture the sunset scenery on our cameras. It was spectacular.
It was a short trip, but greatly rewarding and relaxing. - Jeffrey
Posted by jlee80111 at 2:34 PM