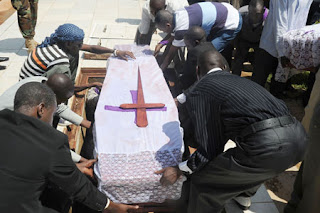 April 7th is the day to commemorate the 1994 Genocide against the Tutsis. It is the 17th year in 2011. How long this sentiment of sad and gloomy remembrance will continue is unknown, but for now, it still remains vivid among the Rwandans. It is a time to look back at the country's bad history and the impact left behind by the tragedy. People march with silence to the Amahoro Stadium where the formal events take place. "Never again" is the catch phrase. Never again. Never again.
The remains of 6,000 genocide victims were accorded a decent burial at Nyanza Memorial Center in Kicukiro District. (Photo left) Similar events happen every year at several places in the country. The survivors and their families appreciate it because they cannot afford to do anything on their own. Their relatives and 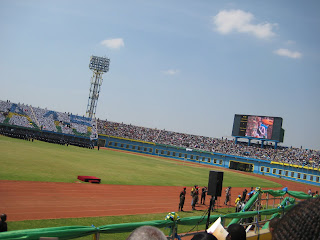 neighbors also appreciate it because the country pays attention to them. The government has established several funds to support the survivors and their children. There are housing projects and vocational training projects.
It is my prayer that all these programs and projects combined produce genuine reconciliation and unity among Rwandans.
Never again, Lord, should this kind of genocide happen not only in Rwanda but also in any other place on the planet earth. - Jeffrey
Posted by jlee80111 at 2:32 PM