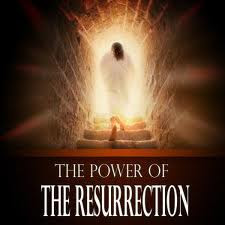 Jesus is risen indeed. He is alive. He is in the midst of our lives through His Spirit.
The Spirit of truth. The world cannot accept him because it neither sees him nor knows him. Bit you (Christians) know him for he lives with you and will be in you. (John 14:17)
The rise of Jesus from death was resurrection, not resuscitation nor re-incarnation. It was the transformation of earthly body into a glorified body without confinement to space and time. It was a body that will be everlasting.
His resurrection was not resuscitation in that some physical bodies were raised to life temporarily or for an additional extended time period but to die eventually. Lazarus was raised to life again but died eventually, for example. Jesus never die again but live forever.
His resurrection was not re-incarnation in that some religions believe as the re-birth of a former life into a different form of life, transcending all forms of lives including animals. These believe that Jesus was born again into another Jesus, re-incarnated, in other words. This is not true at all.
His resurrection was the first fruit of all resurrections to come in the future. It is the promise. Because of this promise, we have hope. The hope for our bodily resurrection and the hope for our everlasting life together with Jesus.
His resurrection is "new life everlasting" and far greater than just renewal and far more than "egg hunt" or rabbit decoration.
His resurrection is the message of the empty tomb. He is alive in our midst!
We greatly rejoice and celebrate, therefore, with Him and all saints in His resurrection today and forever! Hallelujah!!! - Jeffrey
Posted by jlee80111 at 2:33 PM