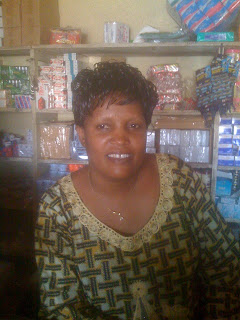 On Monday, April 18th, I made a trip to Bugesera EBU, south of Kigali City. Bugesera was one of the areas that were most severely affected by the genocide and is one of the poorest areas. We have been reaching out to the poor in this area since 2000.
Ironically, in this poor area, we have one of the most transforming clients. She is Beatrice.
She started borrowing from Urwego Community Banking, as was called then, with $38 in 2002. She has transitioned from community banking to solidarity group and to micro business loan over time and she kept growing her business. She used to sell drinks at home. Now she is wholesaling a variety of grocery items to retail businesses in the surrounding areas. The most recent borrowing was $15,000. Other commercial banks try to solicit her, but she chooses to stay with UOB because she appreciates UOB's help when she needed help most.
Recently, she bought a retail store building where she will relocate her business because the current landlord wanted to squeeze her business by doubling the rent.
I wanted to meet her. I thanked her for being our client and asked how we can improve our service. She was grateful for the education/training that she is getting and she promised that she would not let us down. I smiled and said that we would not let her down. Let us grow together. She smiled back and said, "Praise the Lord!" We prayed for her and left since there was a queue of five clients behind us.
The government has been making conscious efforts to building up Bugesera. The new Bugesera International Airport that the government is building is one evidence. This new airport is projected for completion in 2015 and will be in compliance with the international security standard. If done properly, this airport could be an alternative to Kenya International Airport that is substantially larger but not in compliance with the international security standard.
Also, the government is building a train station for cargo shipments that will connect to Tanzania for the cargo movements from the Tanzania port, Dar es Salaam. In other words, Bugesera is expected to be the gateway to Rwanda.
For UOB, Bugesera EBU went through significant makeover last year. Its portfolio at risk was high and the morale was low. We have changed the leadership and under Joyce it has cleaned up the portfolio and has started a strong growth in 2011. We thanked the Lord for the turnaround and encouraged the staff to continue the good work. They were upbeat about where the bank is heading and where the EBU is heading. - Jeffrey
Posted by jlee80111 at 9:34 PM