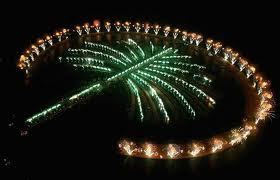 Kristin and I had a 2-day stop over in Dubai on March 26th and 27th. We took the Big Bus double decker two-day program. It is the easiest way to experience a new city, particularly this fascinating city.
[The Palm Jumeirah at night, a man-made residential and hospitality complex that is shaped as a data palm, Dubai's national plant. Here is the Atlantis, a water amusement park copied from the Atlantis in the Bahamas] 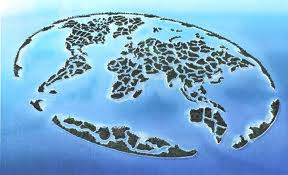 The first day, we saw the Burf al Arab, the world's only 7-star hotel. Its architecture symbolizes a Dhow boat that is sailing smoothly. We also saw Burj Dubai, the world's tallest building with the height of 800 meters (more than twice as high as the Empire State Building), the Palm Jumeirah, the Atlantis. The Burj al Arab picks up its guests via a helicopter from the airport via a helicopter and provides Rolls Royce limo for its guests.
[The World made of numerous islands of which prices ranges from $10 million to $100 million.] 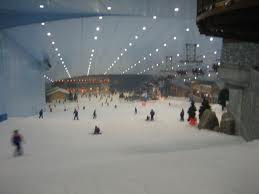 The Burj Dubai has a shape of a drill that looks like making a hole to the heaven. I could not resist thinking of the Babel Tower in the bible through which people tried to reach the heaven. God destroyed it and scattered all people with different languages according to the Bible because God considered the human act as the human's
willful disobedience and defiance against God. This human pride always causes and invites God's wrath. We also saw the glimpse of the Ski Dubai, the indoor ski slope. People take lifts to the top and take the slope over 400 meters. It was totally unthinkable to ski inside a building particularly in a desert environment like Dubai. What do you think? 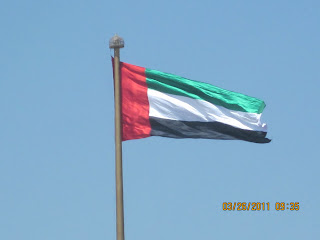 The second day, we took a walking tour of the old city souks (markets), such as gold souk, old souk, textile souk, fish souk, spice souk etc. and took the old Dhow cruise in the Dubai Creek.
Dubai is part of United Arab Emirates that consists of seven (7) emirates. Abudabi is the largest emirate that owns over 80% of the land. Dubai is the second largest emirate and is the commercial and financial center in UAE.
UAE's national flag has four colors: red for security, green for prosperity, white for peace and black for natural resources (black crude oil). I learned that most of Arab countries have some or all of these four colors in their national flags. 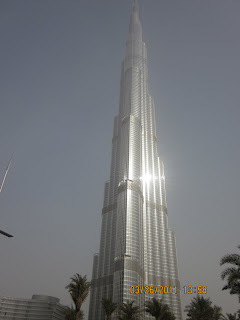 It was a short but an amusing tour, experiencing the extreme creativity of a human mind in architecture, city planning, construction, shopping, hospitality, transportation, entertainment, media and science.
[Burj Dubai, the tallest building in the world. What is amazing is that Dubai has a plan to build 5 more supertowers one of which will be even taller than Burj Dubai. It will be called Al Burj, or The Tower. How much taller should it be?]
In Dubai, there are more than 500 mosques that are the centers of life for the muslims. They pray 5 times a
day diligently. They believe in Q'uran as the word of God spoken through His prophet Mohammed, pray 5 times a day, fast during the month of Ramadan and plan to pay a visit to Mecca at least once in each muslim's life time. Through these disciplined religious principles, they believe that they can obtain salvation from God. Since they believe only one God who does not beget or does not need to be begotten, they cannot understand and accept the triune God, the incarnation, the justification through the messiah's redemptive death, the 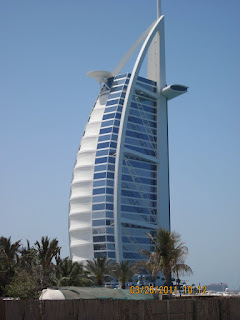 amazing grace of God to the extent of allowing His only Son to be crucified to satisfy His attribute of justice. They talk about truth but never understand the genuine truth, Jesus Christ.
The city of Dubai never bored me, but I could not deny the sense of excessive human pride against the will of God apparent in the minds of Dubai leadership. I wonder how Dubai will continue to transform in the future.
May the faithful Lord be also gracious to the people of Dubai so that they may know the truth through Jesus! - Jeffrey
[Burj al Arab, the one and only 7-star hotel in the world. I learned that Tiger Woods hit a golf ball from the heliport and Andra Aggasi played tennis on the heliport.]
Posted by jlee80111 at 8:16 PM