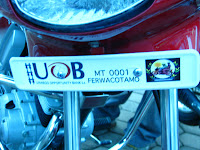 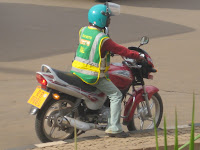 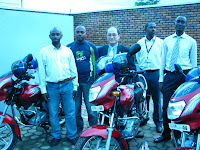 [UOB sticker on the front license plate... With the first 3 riders and staff... A motor taxi rider]
Today, UOB disbursed the first motorcycle taxi loans. Finally!
Motorcycle taxis (motor taxi or ipikiki in Kinyarwanda) are common means of transportation in Rwanda. It is dangerous as people get injured and often die of accidents. But, it gets you where you want to go when you need to go. Rwanda has a mountainous terrain and roads are narrow. As the cities develop more, the traffic jam will get worse. A solution will be motorcycle taxis. Public buses, called "matatus", are cheaper, but the schedule is irregular and they are usually packed. Passenger car taxis are prohibitively expensive. Thus, motor taxis are getting more and more popular despite the risk.
UOB is working on motorcycle loans with the largest motor tax association in Rwanda, called "FERWACOTAMO" that has more than 8,000 taxi riders throughout the nation and the largest motorcycle dealer, called "Sameer Hussein" that holds an 85% market share. These first motorcycle loans have finally come to fruition after more than 6 months of discussion, negotiation, agreement, system configuration, waiting for the delayed shipments. The launch has been delayed for more than 4 months. So we rejoiced and praised the Lord for His faithfulness! We plan to disburse these $1,800 motorcycle loans at a rate of 25 per week or $45 thousands per week.
We developed this micro loan product in an effort to developing micro enterprises. At present more than 65% of the current motor taxi riders are leasing them from wealthy individuals or companies. With the same amount of monthly payment, now they will be able to own the motorcycles in a year. May this opportunity spread over widely throughout the nation!
Another to note is the UOB sticker that will be placed on the front license plate of the motorcycles. (shown in the photo) UOB is widely known to be a Christian organization in Rwanda. I hope to see UOB more widely known to Rwandans through these stickers. - Jeffrey