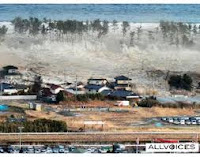 Japan was recently hit by the 8.9 magnitude earthquake in this island country, with the epicenter approximately 80 miles off the north eastern coast. This earthquake was the strongest one that Japan has ever experienced so far. Japan is well used to earthquakes since the country is sitting on edge of the Eurasian tectonic plate bordering two other plates. I hear that 20% of all earthquakes that take place in Japan are magnitude 6 or higher. Thus, Japan is known to be best prepared for earthquakes. Probably so...
But, this time, it was beyond Japan's preparedness. It was so strong that it produced a huge tsunami which hit the eastern coasts of Japan and spread as far as the western coasts of the U.S. The tsunami flooded many villages and towns, causing a countless number of casualties. So far the confirmed death toll is reportedly 12,000 and it is likely to rise substantially more. It is an unbelievable tragedy. We all became helpless and speechless at the power of the mad nature.
To make it worse, Japan had two nuclear power plants severely damaged by the tsunami and the damaged plants made the already wrecked country exposed to significant nuclear threats because of the exposed fluid rods and the failed cooling system, even the back-up. Radio active steams had to be released into the air to avoid even more grave damages that may result from overheated fluid rods. We have been praying for God's mercy on this terrified country.
More than anything else, the world was fascinated by the calm and orderly behaviors that the Japanese showed under the catastrophic circumstances. The Brits have been admiring such Japanese, calling their behaviors as the humanity's most advanced (civilized) one. I am not sure if this claim has any legitimacy, but it is true that the Japanese have astonished the world with the way they responded to the disasters.
We have been lifting up the people of Japan to the Lord for His mercy upon them so that the disasters may not spread any more and that some Japanese may get to personally know Jesus, who is the way, the truth and the life to salvation... while God is still waiting... before it is too late. (2 Peter 3:8,9)
I trust that all things will turn into goodness in His eyes and in His time. Amen! - Jeffrey
Posted by jlee80111 at 5:47 AM