UOB Staff Outreach to the Needy... 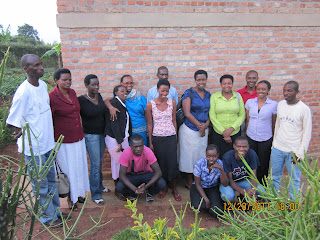 On December 28th, Wednesday, UOB visited 22 families who were less fortunate than most of UOB staff. They are young genocide survivors without their parents. These visits are part of our staff's annual events to share God's love with those who are less fortunate than our staff. This year's visit is the second in a row after the last year's and were made in two groups. I joined a group that visited 19 families who are living together in one umudugudu (village) in Masaka.
UOB staff raised $800 and the bank matched the raised fund to provide 25 kg of white rice, 10 kg of sugar, 5 liters of cooking oil and 10 bars of soap. The 19 families we visited had a total members of 35, with their ages ranging from 18 to 43. They all had unforgettable pains that haunt them from time to time. But now they are living together as a community where all share the earnings and spending together based on the needs. Their shelters are temporary and eventually they will have to relocate to where the government designates. They had some concerns about this planned relocation since they are also growing pineapples where they are now, which help them financially.

Two of our staff also had similar pains in the past and their testimonials and encouragements were powerful. They have been able to overcome the past pains and challenges by surrendering their lives to Jesus who has faithfully cared for them to date. I shared the Word also, but I trust their encouragements were a lot more inspirational to them. I prayed that they will follow the same path in their journeys of life. I was proud of our staff. 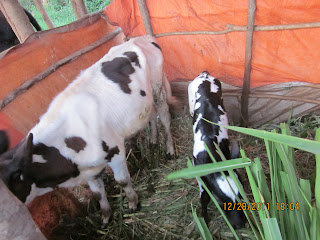 They are growing four cows two of which were young calves. The little one was only one month young. 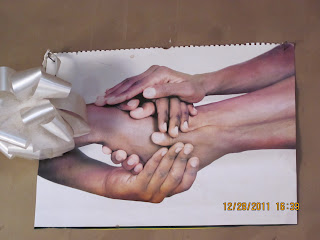 In a tiny living room where we met, I found a poster that showed several hands held together. Unity and cooperation were what I was able to read out of it.

I prayed also that their community living will only strengthen their unity and cooperation further. - Jeffrey
Posted by jlee80111 at 3:56 PM