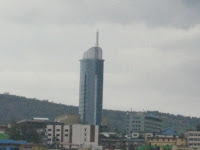 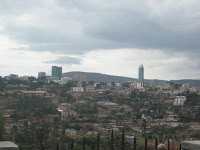 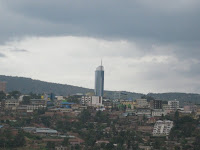 Kigali is located on several hills and valleys. In fact, the entire Rwanda is on the hills. That is why Rwanda's nick name is "The land of thousand hills." To be exact, there are 999 hills in Rwanda.

Kigali has not had high rises. So its sky line is pretty much the same as the hill line. But it is changing.

A new office tower has been erected, called "Kigali Towner." It is a 22-story building, but because it has been built on a hill top, its priminence is apparent from all over the city of Kigali. It greets you from a distance when you are heading from the airport to the city center. As you get into the city center, you will find it right in front of you as you drive up the last hill to the city center's roundabout.

This silver-colored oval-shaped glass building not only stands out in the city, but also symbolizes the bright future of Kigali, where Rwanda will be known for its amazing economic development on top of the incredible unity and reconciliation that they have achieved in only a couple of decades after the horrible genocide in 1994. I am excited to see the future of Rwanda in advance and I am extremently grateful for His grace over Rwanda. - Jeffrey

This is the 2nd time NEXTBLOG has taken me to your blog. Google must like you. Please post a few ground level pictures and let me know how the food tastes.