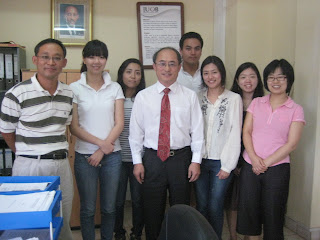 Korea was in ruins after the 3-year long Korean War. The war went into a cease fire in 1953 and it still so remains.
North and South Korean nations have since gone in totally different directions. S. Korea has taken the route of a democratic and capitalist society while N. Korea has decided to be a communist country. Their choices after almost 60 years have produced the results in sharp contrast.
S. Korea has become one of the top 10 economic powers of the world while N. Korea remains one of the poorest countries in the world with millions of people still dying of hunger every year.
S. Korea has turned into a "giving nation" from a "receiving nation" over the past one half a century.
S. Korea is now boosting her efforts in sharing her resources with the less fortunate nations in the world. These efforts take the form of "International Development" and/or "International Cooperation."
On Thursday, December 16th, I met 7 Koreans who are involved in "International Development" from Korea. They are part of Korean NGOs, so to speak. I was encouraged by the fact that S. Korea now has 77 NGOs that are focusing on international development.
What an encouraging news and a positive sign towards Korea's evolution into a giving nation. May Korea become a generous and effective giving nation! - Jeffrey
Posted by jlee80111 at 10:12 PM