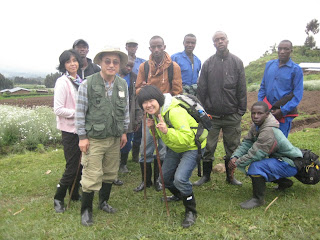 On December 23rd and 24th, I hiked the tallest mountain in Rwanda. It is called Karisimbi at 4,508 m in height. It is one of five mountains (Muhabura, Sabyinyo, Gahinga and Bisoke) that comprise Virunga National Park, bordering the Democratic Republic of Congo. This area is where mountain gorillas are inhabitating.
[We were in high spirit before we began our journey. With the guide (Vincent) and porters]
On the first day, we left Kigali around 6AM for Ruhengeri, the capital city of Musanze District in the north. From there, we drove a little further to the Kinigi Center where you register the trip. We were a party of five: myself, Yurim (a Shalom Bible Study group member), Bohye (a Korean missionary), two young Rwandans (George and Omar) with who 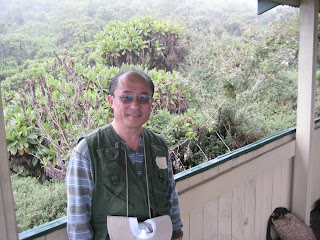 m the missionary is collaborating her ministry. For us, one guide and four porters were hired. Also, there were 6 soldiers who traveled all the way up to the summit and down back to the starting point to protect us from possible annimal attack, like mountain buffaloes. A $200 fee was not that expensive considering all the benefits associated with our trip.
[At the base camp after the first day hike]

We left the starting point at 10:30AM and we hiked until 2:30PM. It was a 4-hour hike. The first-day hike was through a rain forest. It was all wet and muddy. We had to wear rubber-made rain boots. Uncomfortable for the hiking, but there was no choice 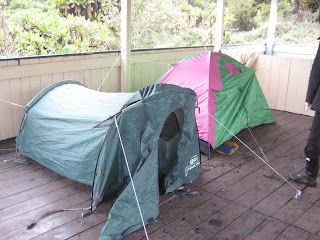 . Even soldiers were wearing the same rain boots. We hiked 1,200 meters in height from 2,500 m to 3,700 m. Tiring, but we were able to sustain it.
We stayed at the base camp that had only a roof cover and a wooden floor without any walls. We slept in the tents though. We arrived at the camp the mid afternoon, but we could not proceed. We had to be acclimatized to the altitude. I crawled into a tiny tent around 7PM and I rested. I had to preserve my energy. All night, there were all kinds of noises, but my intentional resting helped.
On the second day (December 24th), we woke up at 5AM and bega 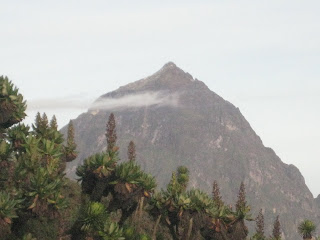 n the summit hike at 6AM with the guide and only one porter. We left all our luggage at the base camp. The summit hike was for 800 meters. Our goal was to reach the summit in 3-4 hours.
[Mt. Mekenro located in DR Congo]

We first had to go through another rain forest of a little more steep hills than the one we passed through the first day. We became more used to the hike, but it was still challenging to us. After the rain forest, we had to cross a jungle without any pathways. It was the toughest segment for me. We somehow had to manage to cross and hike up the jungle, following the guide and porter. 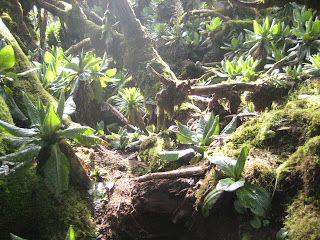 [This is part of the jungle we had to pass through.]
After the jungle came a steep hill with an almost 75 degree. It was more or less crawling and scrambling for us. It was above the tree line so there were no longer big trees, but only bushes and grasses. The mountain wind was blowing from our left to right. It was so strong carrying the mist of the clouds. Our left sides were all freezing. We had to hike the hill for almost an hour. It was a really challenging segment. Yurim gave up at this point because she could not handle the breathing. We could not continue more than 15 steps at a time. Each time we had to stop and control our breathing before we took the next steps. Bohye al 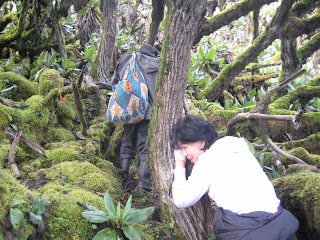 so felt like giving up at this segment, but she moved on and in fact reached the summit the earliest of us all. Hooray!!!
[Bohye was agonizing the hike in the jungle.]
All of sudden we started seeing black rocks that turned from magma when the mountain was a still active volcano. It was clear that we were getting close to the summit. The soldiers were way ahead of us, despite the rifles and machine guns they carried. They were encouraging us, saying that we were almost there. We made the final push little by little, but steadily.
At last, we reached the summit. Hallelujah!!! 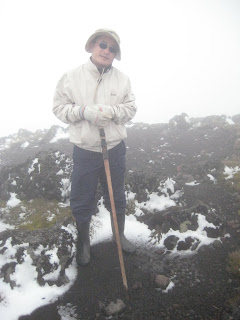 We could not see anything, though, because we were in the clouds. But we were thrilled enough to be able to stand on top of the mountain Karisimbi or Rwanda. Yahoo!!!
[On top of Mr. Karisimbi]
We hugged the soldiers who traveled all the way up for us and also prayed for them as well as for the nation Rwanda. There was nothing other than a tower and it was extremely cold with a strong wind. So after taking a few photos, we had to depart the summit to get back down to the base camp.
The guide, Vincent, could not make it to the top, either. He said his lung could not sustain the height. So Deo, one of the porters, was with us all the way up along with the soldiers. He not only hiked with us but also carried a hot water container and other stuff for us. He never went out of breath and was helping the hike team members. It was amazing to us all.
The process of coming back down was also challenging primarily because of the steep hill and the jungle. But we had the excitement of the summit climb that kept us walking. It took us 2 hour 45 minutes to get back to the base camp. It was 12:45PM. We had to pack up and leave the base camp by no later than 1:30PM. 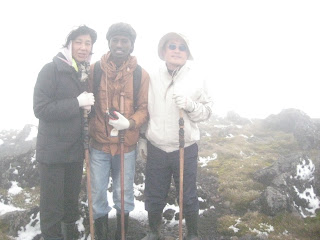 The final walk took us another 2 hour 45 minutes. It was not as difficult as the climb, but it was still not easy because our legs were aching and moreover it started hailing/raining after one hour of hike. The wet and muddy pathway became even wetter and muddier. Yikes!!!
[Bohye, George and me together at the summit. Omar later reached the top after Yurim gave up 200 meters before the summit.]
Instead of buying one, I borrowed a pair of rain boots and it was a mistake. They were apparently too old to be used for the hike. They did not have any traction and I kept slipping. After surviving 20-30 times of near slipping, I finally slipped and fell down in the muddy water. Ooooops and oooo 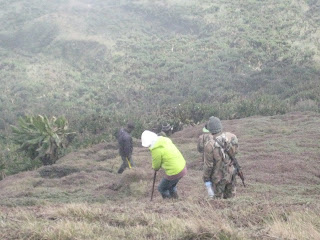 uch!!! I got all wet and dirty... Yikes.... But we had to move on.
By the time we arrived at the starting point, we were all exhausted and barely dragging our legs to the vehicle. It was 4:30PM and all in all it was 10 hours and 30 minutes since we began the day's hike at 6:00AM. The hike alone was approximately 9 hours and 30 minutes. It looked like a miracle that we were still in one piece.
[On the way down. Yurim with soldiers]
We thanked the Lord for His grace upon our journey. We thanked Him because it did not rain while we were hiking up. It would have been almost impossible to hike up with the rain boots that did not have any traction. We thanked Him also that no one was injured. We also thanked Him that most of us made it to the summit and that we even saw the snow at the summit. His creation was indeed marvelous all the way up and down. Praise the Creator God!!! - Jeffrey
Posted by jlee80111 at 11:43 PM