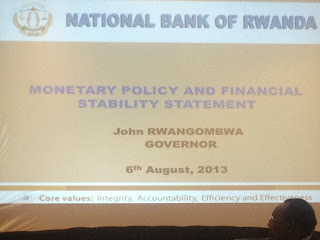 In short, Rwanda is cruising along well despite some challenges that it has faced since the third quarter last year due to an UN report that alleged Rwanda to have been supporting the M23 rebel groups in DR Congo. This report, whether it is true or not, triggered international development countries to suspend or reduce their development aids to Rwanda. Rwanda is denying the allegation and has been diplomatically arguing against the allegation. UN General Secretary Ban, Ki Moon visited three countries in the greater lake region and cleared the air. International development community has resumed their money support for Rwanda and the government has begun to flow the money down to the economy again through its spending.

Inflation remains low at below 4% on an annualized basis and the GDP growth is at the pace of annual 7.5%. Exports remain brisk and imports seem contained. Financial sector continues to lend to the private sector and e-payment system seems to be developing well.

Despite the rosy pictures painted for the country and for the six months this year, Permanent Secretary of the Ministry of Finance and Economic Planning mentioned that the fiscal challenges that the government faced during the first few months this year are not well reflected in the June 30th figure, commending that the BNR has done a great job of maintaining stable and still growing economy despite the fiscal challenges. This fiscal challenge has hurt the poor people in Rwanda that are not well documented elsewhere. 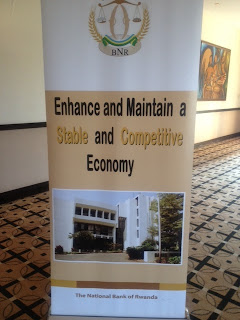 This presentation has been made by the new Governor who formally was the Minister of Finance and Economic Planning. He swapped his position with the former Governor of BNR who is now the Minister of Finance. Rwanda is unique in a sense that vertical swap in positions happens and it is accepted as a norm if it is necessary for the welfare of the country. The current Minister of Finance used to be a diplomat and is very persuasive. In time of Rwanda's diplomatic challenges, someone like Ambassador Claver Gatete is needed for the Minister of Finance post. Meanwhile, the current Governor, John Rwangombwa, is very good and effective with financial management, more suitable for managing the economy and regulating the financial services sector. So the switch happens and their reporting lines are now switched.

Nonetheless, Rwanda continues to amaze me with its ability to manage the economy with stability and steady growth. This meeting was my tenth one since I came to Rwanda and I have never been disappointed by the BNR's Monetary Policy Statement meeting presentations.

I always pray for God's continuing mercy upon Rwanda and her people because the external factors remain uncertain and fragile despite the country's resolve on self-reliance and impressive transformation as a nation. May the Lord extend His mercy and grace to Rwanda! - Jeffrey