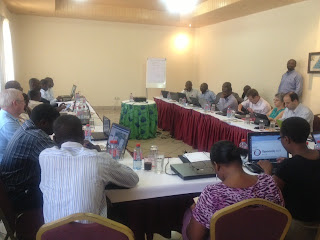 Previously, CFOs and IT people held a few meetings to collect and combine the features for products and services that are currently being offered at implementing members after Opportunity International's chosen vendor Jethro has done scoping works at all implementing members. This meeting was to do the final review of the proposed system from the operational standpoint.

I was pleased to see the proposed system that accommodates all the current needs plus additional features that are available from other implementing members. It will be a robust system.

The trip was challenging for two reasons. First, right after the trip, UOB's board meeting was scheduled to take place on 14th and 15th. Usually it is undesirable to travel before the board meeting or to be distracted from the work of preparing for the board meeting. Second, I had to catch a 2:55AM flight from Kigali and also 8:50PM flight from Accra. Both were red eye flights which are physically draining. Nonetheless I decided to go because my desire to see the system first hand before it is finalized. I was glad that I went because I was able to help identify some critical areas that requires a change.

I pray that the remaining process will go through smoothly in order for us to be able to migrate to the Model Bank as scheduled. UOB is scheduled for migration in August 2013. - Jeffrey