Three years ago, on February 1, Kristin and I arrived in Rwanda. It was Sunday. 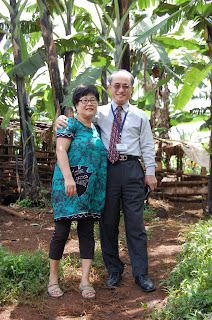 I had a week to take over from my predecessor. During this week, Kristin found a place to live and we signed a lease. It all happened just like we planned it in advance. But we know it was God's providence.

From then on, three years have gone by really fast. People use expressions for time, like "flying arrow" and "flying bullet." Indeed we felt exactly the same way.

During this time, we experienced abundant God's grace. We realized how loving, how good and how faithful He has been. Despite our deficiencies, inadequacy and unpreparedness, He used us for His Kingdom and His people beyond our imagination.

There were discouraging and frustrating times, of course. Sometimes, we were wondering where He was and what He had in mind. At times, we were asking why He brought us to Rwanda among many other countries.

Through these times, however, He let us know, in His perfect timing, of His will, His purpose and His way. He has been amazing in abundant love. It was amazing grace.

People have started asking us when we would return (to the U.S.) Our response is "We do not know." We have not been serious about asking Him when and where. But returning to a place on earth is meaningless to us. Because the only places for us to return to are to the dirt in body and to the Father God in spirit. We want to live on earth. The planet earth. Wherever He leads us, we shall follow.

Wherever we live and whatever we do, however, we want to live according to His will and to do what will please Him.

May God make His face shine upon us again in the next part of our journey on earth! Until all have heard. May His Kingdom come! - Jeffrey
Posted by jlee80111 at 11:01 PM