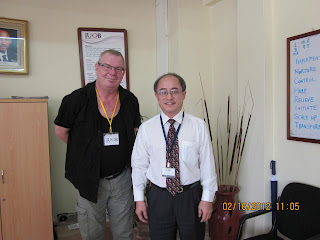 Goran Skytte is a Swedish author, journalist and a TV anchor. I had a meeting with him today. His daughter, Jenny, a medical doctor, had to leave Rwanda early because of illness. She has been serving with Doctors without Border.

He was born to a Christian family, but he became an atheist and a community when he was young.

When he was at his peak of life, enjoying his fame and wealth, God did not leave him alone but reached out and touched his heart. He returned to Christ and has become a Christian.

But the cost of becoming a Christian was high. He had to leave the TV screen because of his faith in Christ. It was a form of persecution but he remained joyous. He would rather choose to stay in the true light, Jesus, rather than the spot light for the TV filming.

He came to visit Rwanda and witnessed the transformation that has been occurring.

He came to visit UOB because UOB is a business as mission or BAM. He was introduced to me by Mats Tunehag, the BAM specialist at the Lausant Movement and also a Swedish. Goran wanted to make a film, focusing on BAM. I said I would love to share the story for Jesus and His Kingdom.