'I Have a Dream' - Breaking Racial Barriers in Christ's Love... 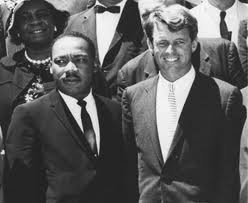 In remembrance of Dr. Martin Luther King, Jr's birthday, we should remember the commandments of Christ's love and dare to obey them in our lives no matter what the world tempts us to believe and say to us.
[The following article is an excerpt from Billy Graham Evangelic Association's Blog. Please click below to watch a video clip that shows Billy Graham in action in 1965, breaking racial barriers in Alabama. It is a touching and inspirational 13 minute video clip. May you have "Shalom" in your heart under any circumstances! - Jeffrey ]
BGEA: 'I Have a Dream'
January 14, 2011 - As we celebrate the 25th anniversary of the holiday recognizing Dr. Martin Luther King, Jr., learn about his friendship with Billy Graham and pray for racial unity in our nation.
Had it not been for the ministry of my good friend, Dr. Billy Graham, my work in the civil rights movement would not have been as successful as it has been.

“I have a dream,” cried Martin Luther King, Jr., on August 28, 1963, “…that one day this nation will rise up and live out the true meaning of its creed, 'We hold these truths to be self evident, that all men are created equal.'"

In 2011, as people debate whether the United States of America has achieved that dream of racial equality, we pause to celebrate the man who uttered those profound words.

Martin Luther King, Jr., entered the Christian ministry and was ordained in February 1948 at Ebenezer Baptist Church in Atlanta, at the age of 19. In 1954, upon completion of graduate studies at Boston University, he accepted a call to serve at the Dexter Avenue Baptist Church in Montgomery, Alabama.

While there, King was an instrumental leader in the Montgomery Bus Boycott, made famous by the nonviolent resistance and arrest of Rosa Parks. He resigned this position in 1959 to move back to Atlanta to direct the activities of the Southern Christian Leadership Conference. From 1960 until his death in 1968, he also served as co-pastor with his father at Ebenezer Baptist Church.

In was in 1957, that King was invited by Billy Graham to give the opening prayer at a major Crusade event in New York’s Madison Square Garden. That same year, Mr. Graham asked King to join him at a private planning retreat to help Billy Graham Evangelistic Association team members understand the racial situation in America more fully.

As their friendship grew, King asked Mr. Graham to call him by his nickname. “His father,” explains Graham, “who was called Big Mike, called him Little Mike. He asked me to call him just plain Mike.”

King credited Mr. Graham with having a significant part in reducing the tension between whites and blacks in the South. In 1965, Mr. Graham canceled a tour of Europe to preach a series of crusades in Alabama, praying that the Gospel would tear down walls of division between the races and seeing the importance of his work alongside King’s.

King later said, “Had it not been for the ministry of my good friend, Dr. Billy Graham, my work in the civil rights movement would not have been as successful as it has been.”

During the civil rights movement, Mr. Graham preached, “Jesus was not a white man; he was not a black man. He came from that part of the world that touches Africa and Asia and Europe. Christianity is not a white man’s religion and don’t let anybody ever tell you that it’s white or black. Christ belongs to all people; He belongs to the whole world!”

Mr. Graham was in Australia at the time of King’s death. He remembers the moment someone approached him with news of King’s assassination, followed by journalists seeking a quote. “I was almost in a state of shock. Not only was I losing a friend through a vicious and senseless killing, but America was losing a social leader and a prophet, and I felt his death would be one of the greatest tragedies in our history."
Posted by jlee80111 at 9:55 AM

Hey, I just came across your blog by doing a bit of blog-surfing and I'm glad I did! I've added myself as your newest follower, and I hope you'll check out my Christian devotional site as well: www.nocondemnation81.blogspot.com

Have a blessed day!