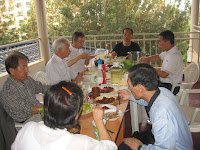 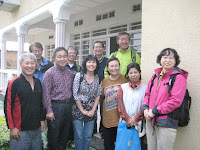 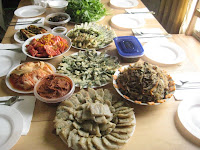 [At Prof. Shin's dorm at KIST.... A feast prepared by Dr. Kim's .....A group shot at the Dr. Kim's]
There are a dozen Korean seniors living in Rwanda. Many of them are volunteers through KOICA and others are missionaries and the like ministering to the Rwandans.
They formed an informal gathering and named it "Korean Seniors in Rwanda." The purpose of the gathering was: 1) to fellowship with each other, 2) to share relevant information with each other and 3) to do good works together for the needy.
KSR has chosen to collect and build up a fund to assist a boy who was begotten by a Korean father and born of a Rwandan mother. He was named "Daehan" that means "Great Korea" in Korean. Unfortunately, his father disappeared some time ago and now is rumored that he died in S. Africa. KSR members wanted to establish a fund that will help Daehan go to college and settle down when he grows up.
KSR also wanted to expand its charitable work as time goes by.
KSR members include three professors at ISAE, an agricultural college, one professor at KIST, a technical college, one professor at NUR, the largest national university and a vet doctor as a missionary, a representative for Korean New Village Movement, the chief representative for KOICA and myself. There are wives of some of the members who also participate in the gathering. There are others who are eligible but have not joined the gathering yet. I pray that this group of people may bring some value and assistance that Rwanda needs. - Jeffrey
Posted by jlee80111 at 9:02 PM