Summer Interns from the U.S. 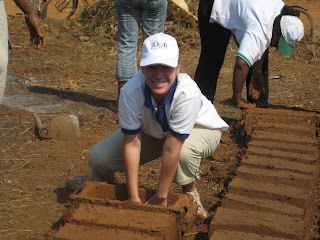 During the summer, we have had three summer interns from the U.S. They are Jackie, Jinho and Seung Chul.

Jackie finished her internship early July and has gone back to the states. She finished her sophomore year and spent two months with us. She worked on marketing and webpage projects. As a young college student, she was mature and participated in all activities with enthusiasm. She wants to go to a law school after graduating from the college. She desires to help the poor in the developing countries later. Jackie felt a lot more comfortable with foreign living after her life in Rwanda. It was very encouraging to see a young lady like Jackie think globally and develop into a global person in this global age. [Jackie making dirt bricks on an Umuganda Day]
Jinho finished his internship on August 7th. He had worked with us for two months. He is a graduate student at Columbia University, New York. He is a Korean student. He has helped us with marketing reports for each EBU, but he has helped me tremendously in putting together many policies and business continuity program. He was fast and highly productive. He even helped me over the weekend. Jinho traveled to Tanzania on a summer mission before he started his master's program in the U.S. and liked Africa very muc 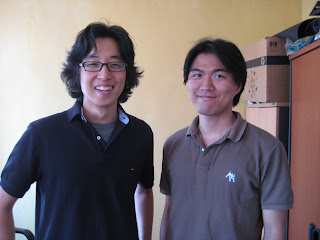 h. Later, he desires to help the poor hopefully through clean and renewable energy and micro enterprise development. He was a godly young man and it was a blessing to have him on our team even for a while.
[Jinho - left and Seung Chul - right]

Seung Chul ("Chul") is an interesting guy. He graduated from the Kellogg School of Business with an MBA degree this year. But he also has a master's degree in political studies. He is a third-generation Korean Japanese, living in Tokyo, Japan. He worked for UNESCO in Korea and for Red Cross International in Fiji and Myanmar. His previous job before the MBA program was with Bain & Company in Tokyo. He will go back to Bain & Company and work there for at least two more years. Amazingly, he has visited approximately 50 countries. Wow... for his age of 37. Chul is interested in social enterprise. He started his post-MBA internship on August 3rd and will continue until the middle of September. So far, he has finished a feasibility study report on mobile branch with impressive work quality, and is now working on developing procedural manual for business continuity program. He will surely bring good value to the bank while he will be with us for six weeks. He started his African tour from Kenya to Uganda before he arrived in Rwanda. After his internship with UOB, he plans to visit Malawi and South Africa. He plans to meet his wife in Johannesberg before he goes back to Japan. What a global person he is!
God clearly works through people. He leads His people to meet each other in His time and by connecting them He creates synergistic value for His Kingdom. It is a great blessing to be able to meet so many people with so diverse experiences and background.
These interns may be inexperienced in banking and micro finance, but they bring tremendous value to an institution like us, because they understand the instructions clearly and know the expectations. At the end, they produce what is expected. And fast. It is great joy to work with them.
Lord, may Your Kingdom advance through Your people in a way beyond our imagination! - Jeffrey
Posted by jlee80111 at 6:55 PM

What a blessing! You interfaced with very interesting young people. I am very impressed with their adventures in life. Hope they can impact the world in more positive and productive way. Thanks for sharing their stories. I've pray that God will bless them with their servant spirit.

Thank you, In. Indeed it was a blessing to have them with us even for a short while. - JJL