Rwandan Coffee is on the Move... 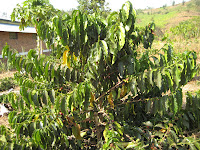 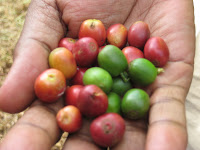 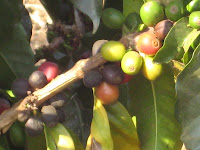 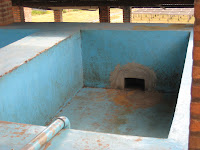 Many use bicycles or carry on their heads.
Once the coffee cherries arrive at the washing station, they are poured into a tank where the dirts are washed. Then they will flow into a machine that will peel the skins and sweet liquids (called "mucilage") that cover the coffee beans inside. The machine also sorts out the 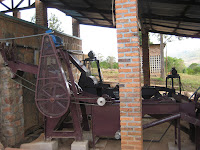 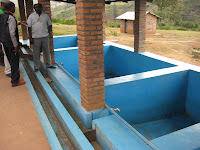 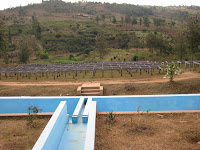 Then, the coffee parchments are placed on the regular drying decks to be dried for 14 days in the sun.
[=> A big tank for final cleaning and drying decks over the washing tank]

All in all, thus, it takes 18 days from the time the cheeries arrive and are born again to dried coffee parchments. Please note, however, they are not coffee beans yet. 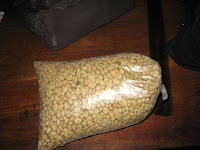 These dried coffee parchments are collected into bags and stored until September when active coffee trading takes place. In Rwanda, the coffee cherries are collected by the farmers during April through June during the rainy season. Once it enters the dry season, coffee trees do not produce cherries any more. The rest of the year is the time of rest for the tree and also for the farmers. (Thus, the coffee farmers usually get involved in other economic activities.)
[A sample bag of parchments]

In September or so, the coffee parchments are processed to remove the stuff that is surrounding the coffee beans. Once the outer stuff is removed, finally coffee beans are produc 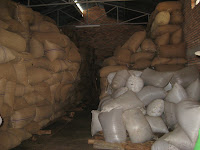 ed. These beans are called "green coffee beans." They indeed look light green.
[=> These parchments value approximately $180,000.]
These green beans are sold to a coffee roasting house or a trading company that collect the coffee parchments to sell in bulk to the roasting house. These green beans are roasted according to the specific requests of the coffee distributers and/or the end-users, like Starbucks. Depending on how the roasting has been processed, the coffee would taste completely different even with the same coffee green beans. Of course, the roasted coffee may be ground and brewed, ready to be sipped and enjoyed. Hmmm.... Ahhhh.....
As a banker, I could not resist the urge to find out about the financial aspect of the coffee production cycle. The coffee cherries are sold to a washing station at RWF120 per kg, pretty cheap. The farmers are getting paid by the washing station when the sale takes place. Coffee farmers usually belong to a cooperative that usually owns a washing station. The one I visited was owned by a cooperative that has 125 members.
The coffee cherries will lose the weights as their skins are peeled and the mucilages are removed. After the parchments are removed, 5 kgs of coffee cherries will shrink to 1 kg of dried green beans. So to produce 1 kg of green beans, 5 kgs of coffee cherries are required or approximately RWF600 or a little more than US$1.00. But this 1 kg of green beans will be sold to the roasting house at approximately $3.50, a three-times higher price than the cost. These green bean price fluctuates widely depending on the weather and the harvet yields. Sometimes, Rwandan coffee beans could sell at $50 per kg when there is severe shortage of supply, I was told, because it is a gourmet coffee.
The cooperative and the washing station then will cover all the processing costs, facility depreciation and maintenance costs, administrative staff expense, finance charges for using a credit facility to make prompt payment to the coffee farmers etc. Whatever is left over will then be distributed to the coffee farmers as profit.
A one kilo gram of green beans will turn into a lot of coffee.. hundreds of cups of coffee. Let us suppose that one kilo gram of coffee beans will produce only 100 cups of coffee and each cup costs only $1.50. Remember Rwandan coffee is a specialty coffee and it more expensive than regular coffee, but for the sake of argument... In reality, how much do you pay for a cup of coffee? 1 dollar? 2 dollars? 3 dollars? Sometimes more than 5 dollars at Starbuck's? Doesn't it sound like a rip-off! It may be...
But you also have to bear in mind the freight, the insurance, the storage cost, the administrative expense, the packaging cost, the marketing expense, a mark-up profit etc. throughout the chain of distribution until it is finally delivered to you through a coffee shop or a supermarket.
Do you love coffee? Try Rwandan coffee. It is good. You can even order via internet. It has been gaining more popularity since Starbuck's owns a coffee farm here in Rwanda and uses Rwandan coffee partly for its own gourmet coffee. Try it. It is good. - Jeffrey
Posted by jlee80111 at 1:34 PM