Human slaves... It is inconceivable now, but it was the reality in the past. 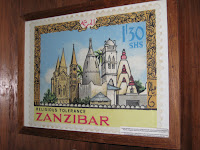 Kristin and I had an opportunity to visit the "capital of slave trade" --- Zanzibar.
[A stamp in the House of Wonders Museum, which shows all kinds of religious buildings, symbolically indicating the religious freedom]
It is now part of the United Republic of Tanzania, but it still maintains a significant amount of autonomy. Before the union in 1964, Zanzibar was an independent country for a short while after it was under the control of the Brits for some time. Previously, however, this island off the coast of Tanzania was part of Oman's 12 Sultans and an important center of trade in the Arab world. When Oman was prospero 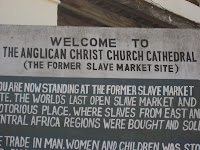 us, it controled all eastern coasts of Africa, Zanzibar and its own country of Oman. Once, Zanzibar was the capital city of the Oman Empire before it was surrendered to the Brits.
That is why Zanzibar is a Muslim society. 99% of the Zanzibaris, as its people are called, are Muslims. Zanzibar is composed of two islands, namely Unguja and Pemba, and many small islands. The capital city of Zanzibar is called Zanzibar City and has the famous Stone Town that is one of the World Heritage Sites.
In Stown Town alone, there are 72 Islamic mosques, but there also are 7 Hindu temples, one Roman Catholic church and one Anglican church. I later learned that small Christian churches are being planted in the rural areas. Although Muslims are dominating the society, 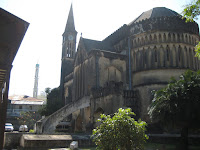 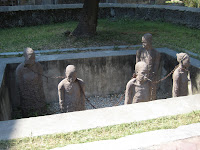 Inside the Anglican church, the altar was built right on the spot where the "whipping post" existed. The defiant slaves or the slaves who needed displines were tied at the whipping post and whipped severely. Some marble stones on the spot depicted graphically some bloddy spots.
Outside the huge church building, at one corner, there was a sculture of slaves chained around their necks in a chamber below the ground level. A sad feeling erupted...
We also visited an underground cave right at a beach. 30 or so steps from the ground, we found a huge space, unlit and naturally preserved. Slaves were hidden here for illegal trade, after the formal market was closed and after the slave trade became illegal. The cave was connected to an exit on the cliff only accessible from the sea where the slaves were loaded onto ships for sailing. We learned many died there while waiting for the trade mainly because of the lack 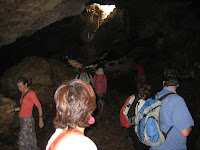 of oxygen. The cave was as deep as 3 km.
The slaves loaded into ships set sail primarily to the North and South Americas and the Caribbean Islands. The journey was long and rough. It is said that as much as 50% of them died during the journey and only the strong survived, yet for another humiliating lives as slaves.
The slave trade was prevalent during 14th to 19th centuries, involving as many people as 9-12 million. African slaves were exported out of West Africa and Central Africa. Zanzibar was the center for the Central Africa slave trade. The African kings received various goods in return for the lives of their own people. The European and Arabic slave traders took them to the Americas. In return, they bought cotton, sugar, tobacco, rum and brought them to Europe. This trade was called the "Triangular Trade."
Ironically, I hear that there are still human traffic going on in the form of sex slaves even nowdays. Although illegal, the idea of a human thinking of selling another human as a slave makes my heart gloomy and angry. It is the greed.... and more deeply the depravity.... the sin nature.
As the night goes deeper, the dawn is nearer, the Bible says. In the midst of sadness, therefore, there is hope. The hope for the ultimate judgment. The hope for the eternal liberation from the depravity. The salvation and freedom from the presence of sin. Maranatha! (Oh Lord, come!) - Jeffrey
P.S.: On a different note, Rwanda was the only country in East Africa that resisted the slave trade. The Rwandan kings refused to sell their poor people as slaves. Rwandans are proud of this history and rightfully so.
Posted by jlee80111 at 5:08 PM