As part of our 30th anniversary celebration, we toured Ecuador through a 10-day Ecuador Crash Course. Why Ecuador? Ecuador has been interesting to me for several reasons, one being that Ecuador is the country Jim Eliott, an American missionary, gave his life to win souls for Jesus.

A group of 23 people joined this tour organized by Sarah, an American nurse and former Peace Corps volunteer to Ecuador. She married to an Ecuadorian and has lived in Ecuador for the past 25 or so years. She works with Jonathan who was born in Ecuador to American parents. He has been running a travel agency for the past 15 years. They were assisted by Roger, another former Peace Corps volunteer, and Susanna, an Ecuadorian lady and yet another former Peace Corps member. Susanna was the Spanish instructor and Roger was a tour guide. Despite their different life backgrounds, they all have one thing in common. They all love Ecuador. 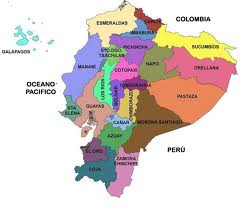 They organized the tour with all their hearts and energies poured into it. As the tour progressed, we could sense how much they love Ecuador and how they genuinely wanted to share the un-vanished version of what Ecuador offers. I am sure they have their own views on locations and lifestyles, but they worked hard to be as independent and objective as possible.

All participants had quite a variety of backgrounds also. Many have already retired or are quite close to their retirement. Their professional backgrounds were also quite diverse, from a retired pastor to a retired CPA. Ages varied from an 18 year old Canadian high school graduate to a 78 year old retiree who has great grand children. We were in the middle of the pack.

We traveled more than 1,500 km by a bus, starting from Quito and ending in Cuenca through traveling to the northern Ecuador close to the Colombian border and several beach towns on the coast. About half of the group continued for a two-day extended trip to further south close to the Peruvian border, after the 10-day crash course trip ended in Cuenca. The traveled routes are marked in the map included in this blog post.

The trip started from the capital city of Quito that is 9,350 feet high. Quito is a vibrant city with multiple ethnic peoples and cultures. We stayed at a small hotel in the Mariscal District where all commercial and entertainment activities take place. It was noisy until late night but we could feel the vibe of the emerging city. Note that Ecuador's average age is reported to be 21.5 years. Quite young.

We then traveled north to Otavalo, Ibarra and Cotacachi, northern cities of interest to many retirees. These cities are all located in the sierra between mountains. Otavalo has the largest handcraft market in Latin America. Ibarra is the provincial capital of Imbabura with approximately 200,000 inhabitants. Cotacachi is a small town with 10,000 of which 400 represent gringos or migrants from North America. It is also a capital for leather products. Great leather products at low prices. On the way, we crossed the equator line where southern and northern hemispheres meet.

Our next leg of the trip was heading to the coastal areas, after one night in Quito. The stops included Canoa, Bahia, Manta, Puerto Lopez, Montanita and Salinas. We visited an American artist's house in Jama, namely Lisa. Her house was right by a lagoon and her entire house was an artwork. She was living without a refrigerator.

We stayed one night at Canoa Beach Hotel owned and run by an American architect, Greg, and it was a pleasant surprise with American quality rooms and services. Strolling on the sand beach in the morning the next day was refreshing despite the rain that soaked us up.

The next day, we headed down south, passing through Manta, the largest port of Ecuador and the fourth largest city with 200,000 in population. We stopped over at Bahia for lunch. Bahia had both fresh water beach and salt water beach at the mouth of the Chone River. Most of us crossed the river by a small ferry boat. We ate at a restaurant by the water owned and run by an American entrepreneur, called Trip, who married to a Colombian woman.

We stayed another night at Puerto Lopez, a small fishing town, but the hotel we stayed, La Terraza owned and run by a German couple, had a panoramic view of the bay. It also had displayed a skeleton of a humpback whale, namely Fritz, that weighed 35-40 tons and was found dead around Puerto Lopez. On the way down south, we stopped over at Montanita Beach which is the surfing capital in Latin America. The beach town was bustling with young backpackers who came to try their surfing skills. It even holds international surfing competition.

We stayed the third night at a hotel by the Salinas Malecon. Salinas is nicknamed Miami of Ecuador. It is one and a half hour away from Guayaquil, the largest city of Ecuador with more than 2.3 million people in population. People of Guayaquil, or Guayaquilenos as they are called, travel to Salinas for their weekends or for their vacation. It was a crowded beach but well maintained. Along the malecon, dozens of condominiums rise to 10-15 stories high.

One thing to note is that all these beaches maintain mild temperatures although they are located close to the equator. The secret was the Humboldt Current that originates from Antarctica, moves along the shorelines of S. American countries, Chile, Peru and Ecuador, and turns to the Galapagos Islands and returns to Antarctica. This Humboldt Current is upwelling from the bottom of the ocean to the surface, thus providing many nutritional elements. This upwelling thus attracts many kinds of fish, supplying 18-20% of fish demanded by the world. This Humboldt Current cools off the water and maintains the temperatures of beach towns around 65-80 degrees F year around. Every 5-8 years, these beaches suffer from the warm current from the South Pacific which results in heavy and destructive rain, called "El Nino." It is named as such because this El Nino occurs usually in December.

From Salinas, we traveled back to the highlands. The first stop was Guayaquil, the largest city of Capital. It is by the water where rivers and the Pacific Ocean meet. Also, the mouth of the river where the city is located is blocked by a large island. So it was hot and humid, with little benefit from the Humboldt Current. The city was vibrant with a lot of metropolitan flavor particularly around Malecon 2000 which is the board walk along the river. It includes gardens, IMAX theater, museums and many other amenities and facilities. At the city center, one small park, called Parque Semitario, has 70 large iguanas that are fed by the government.

From Guayaquil, we traveled a scenic route to the top of the mountain, as high as 14,000 feet, over three hours. It was a rapid ascension but the view was panoramic and breath-taking. Then, we descended for 25 minutes to arrive at Cuenca at approximately 2,500 meter or 7,500 or 8,300 feet high.

Cuenca is the third largest city in Ecuador after Guayaquil and Quito, with the population of approximately 500,000. Cuenca was a lovely city. Many gringos from the U.S. and Canada have moved to live in this beautiful city, calling it their home, which offers low cost of living, wonderful climate, rich cultural flavor and many colors of Ecuador. It was estimated that the city has 3,000 gringos.

Ecuador is a beautiful country. It offers many attractions including cultural and geographical diversity.

It has the famous Galapagos Islands, many coastal beaches, cool highlands and Amazon jungles. Also, Ecuador offers Incan and Spanish heritages as well as indigenous cultures. The country is very fertile due mainly to the volcanic activities and anything that grows elsewhere grows in Ecuador. It produces crude oil and natural gas, so the energy cost is very inexpensive. Ecuador is the largest rose exporting country. Ecuador first produced toquilla straw hats in Montecristi, but they have been named Panama hats because US President Roosevelt wore the hat after his visit to Panama Canal construction site where most of construction workers wore them. It has the equator crossing the country. Ecuador means the equator in Spanish and it was adopted when the old Grand Colombia was broken into three countries: Colombia, Ecuador and Venezuela. Because of this equator line crossing Ecuador, it claims to be the middle of the world. Ecuadorians are proud of their countries. They have high level of dignity and strong principles. Ecuador is colorful. And there are much more Ecuador can offer than what I can describe.

That is why people fall in love with Ecuador when they visit the country. We were not an exception. We have come to love Ecuador.

Additional photos of Ecuador are below. Enjoy them. Better yet, you should visit Ecuador yourself for the first hand experience. Chao~ - Jeffrey