July UOB Day is like a half time in football or soccer for American friends. In January, we rally around the new year and new business plan for the year. It is like a rally that football players are doing in the locker room before the game begins. After the first half is over, the players and coaches go back to the locker room, and they review how they did during the first half and prepare for the second half. In the same way, we reviewed how UOB performed during the first half of the year and shared the plan for the second half of the year. 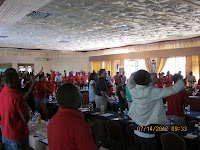 For this year, the speaker was Pastor Christine Gatabazi, who is co-ministering to an Assembly of God church along with her husband who is the senior pastor of the church. She was a dynamic preacher.

We formally introduced the 5 W approach: Welcome, Worship, Word, Work and Wrap-up. This introduction was still far from an acceptable level we may achieve when it is fully implemented. But it was a great beginning because UOB Day format followed the same 5 W approach.

For the Management Update, I took a little different approach from previous years. I asked all executive officers to participate in the presentation with 3-4 slides that cover main points pertaining to his or her responsibilities. I liked it and I will intend to expand their presentation on the next UOB Day.

One thing to note was that for the past six months, 29 new babies were born to UOB staff and 12 staff got married. How productive UOB staff has been! The staff who is scheduled for wedding for the next six months will receive a necklace that has a key. The key symbolizes the key to opening a happy relationship. This key necklace is handed down to next staff who will get married later. On July UOB Day, three staff was introduced and received each a key necklace.

This July UOB Day had many guests and visitors, including Triple Jump Advisory Services consultants who are helping us on mBanking. Also was there a group of people from Merry Year International: Mr. Booyeol Kim, Mr. Jinbo Jeon and Ms. Sungeun Choi. MYI will establish a loan guaranty fund against which any credit losses incurred from secondary student loans that UOB will make. Mr. Kim and Mr. Jeon left on Saturday while the UOB Day was still taking place, but Sungeun Choi will stay in Rwanda for at least one year, working as an intern.  Also we had several OI US development fund raisers who will accompany the visitors to come.

I was tired after the UOB Day, but very encouraged by the unity or "oneness" that we demonstrated through the gathering and activities that we did together. May this gathering continue to strengthen the teamwork and unite the staff in Christ's love. - Jeffrey
Posted by jlee80111 at 11:11 PM