Joseph, Man of God with Forgiveness 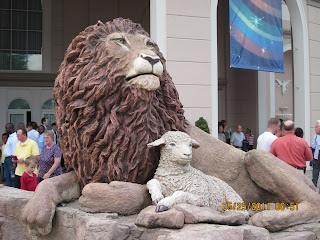 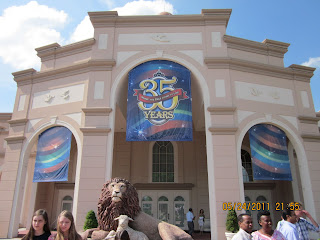 [The Millenium Theater Entrace.... A statue of a lion and a lamb. Lion symbolizes God Father and a lamb symbolizes the slain lamb, Jesus. Salvation belongs to the Father God sitting on the throne and a little lamb who has been slain without a sin. They are our salvation.]
Usually, people talk about Broadway when musicals are discussed, whether they on-broadway or off-broadway shows.
I found one way-off-broadway show that is larger in scale and much godlier than most of on-broadway shows. It was not in Los Angeles or Miami or Philadelphia or Chicago or San Francisco.
It was in Lancaster County in Pennsylvania. It is called "Millenium Theater" run by Sight and Sound. In the neighborhood, there are no other shows or commercial neon signs. Only this theater stands out next to a Amish farm.
This theater can house almost 3,000 guests at one time. The stage is the largest that I have ever seen for commercial purposes. The technological skills produced Joseph to fly in the sky in his dream. Dozens of animals were mobilized and used for the musical, including camels. Moreover, the actors were using the entire theater as the stage. People run down on the hallways and horse barns appear on the side walls. Egypt's palace, spinx, pyramids are all coming alive with the props and actors in harmony. Even more amazing than all these was that all they produce and show are biblical contents. For the past 35 years, they have been producing and showing only biblical contents, primarily people in the bible. It was all started by a photo grapher who wanted to share his work in a way to celebrate God's creation. With some sound and light effects, his show began drawing interest from the neighbors. So he has started producing Christian musicals solely for the purpose of praising God's grace. It has now grown to be one of the most prominent musical theaters in the nation over 35 years. It is unbelievable that this size of musical theater can sustain its operations in a relatively small county, producing and showing only Christian musicals. Ordinary talent offered in genuine spirit may turn to be fragrance to God and may bear many fruits beyond our human imagination. It cannot be sustained without God's grace.
Joseph was a man of God, upright with integrity and humility. He was patiently waiting for God's right time for him to be called into His ministry. He was also a man of wisdom, using God's perspective on all decision-making processes. The most powerful display of his godliness was when he boldly forgave all his brothers who sold him as a slave to Egyptian merchants and lied to their father, Jacob, that he was killed by wild animals.
His comment: "you have tried to harm me but God has turned your sinful intent to produce His goodness. He has sent me ahead of Israel so that Israel may be saved from the severe famine." What a tremendous confession of his faith in God! May this all be our confession in our lives, whether we are under God's grace or not. We should be thankful all the way. - Jeffrey
Posted by jlee80111 at 5:03 AM