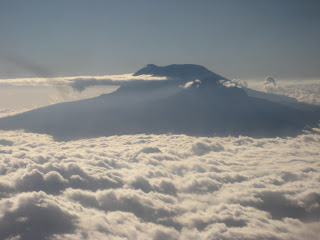 Seven friends and I have a plan to hike Mt. Kilimanjaro in August 2011.
[This photo was taken from an airplane in 2009, which gave me the dream to hike it.]
Today is D-100!
Now the countdown has begun.
Some statistics:
Two are from Rwanda, two are from New York and four are from S. Korea.
Seven are in their 50's and one in his 20's. (Originally all would have been in their 50's but at the last minute one has inherited to his son.) Their ages total approximately 400 years.
Five are men and three are women.
There is only one couple.
All desire to reach the summit, but the probability is only 50%.
So far we have exchanged 14 correspondences.
We all are excited!
Hooray! - Jeffrey
Posted by jlee80111 at 3:22 PM

thanks for this experience sharing. nice snaps