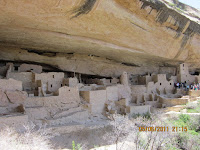 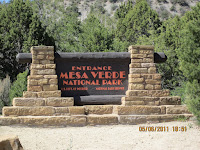 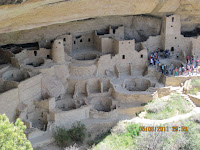 [Mesa Verde National Park.........Cliff Dwellers lived in places like this and there are 4,000 sites like this, small and large]

Mesa Verde National Park is in Colorado, close to the Four Points where four states meet: Colorado, Utah, Arizona and New Mexico. The site above is called Cliff Palace, the largest of 4,000 sites. This place has approximately 130 chambers and it is believed that 125 people lived there and the place has been used as a town hall for many smaller cliff dwellers in the area for the purposes of gathering, trading and ritual activities.
It is mysterious that American Indians who chose to live in open caves like this for less than 100 years disappeared out of these cliff dwellings suddenly as if they all raptured. It is suspected that they could no longer live there because of the prolonged droughts that are estimated have lasted for 23 years around early 1900's.
Architects are said to find the construction of the buildings to be very sophisticated with accurate geometry used for the construction. Water was collected from drips and rains. They grew agricultural crops and made potteries.
Whatever the reason may be for their choice of living under the big rocks and for their sudden disappearance from these cliffs, it is amazing to go back to their ancient living through these sites. - Jeffrey
Posted by jlee80111 at 4:00 PM