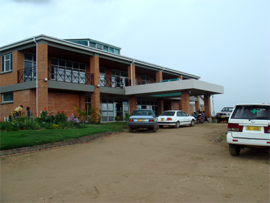 During my trip to Lilongwe, Malawi to attend the OI Africa CEO Conference (Feb. 10th and 11th), I paid a visit to Daeyang Luke Hospital. It was established and opened in 2008 by a Korean female missionary with the financial support of a Korean company, called Daeyang. It is known to be one of only few hospitals in Malawi that have contemporary facilities and modern medical equipment. It is the only hospital in a region that has a population of more than 130,000 people although there are several clinics.
This hospital also has a nursing college that was opened recently. It has first admitted approximately 35 students . These students will begin a 3-year course now, but the school has a plan to change it to a 4-year college program soon. The first dean to this nursing college will be Dr. Susie Kim from S. Korea. She is the wife of the late Dr. Linsu Kim who went home to be with the Lord in peace a few years ago.
He was a special man to me.
He wass an excellent scholar in management policy and technology management, better known internationally than in Korea. He wrote a countless number of books and valuable articles. "Imitation to Innovation" comes to my mind.

Dr. Linsu Kim was an effective teacher with profound contents and effective delivery. Not only was he a good teacher in his academic field but also was he an inspirational teacher of the Word.
He was a godly man with passion for God and compassion for people who were in need: the physical, mental and spiritual needs. He lived a life that was frugal, humble, joyful, peaceful, caring and exemplary to many Christians.
Personally, Dr. Linsu Kim was an influential mentor to me. I sat in only one class when he was an adjunct professor at Yonsei University, while working as a senior researcher at KDI (Korea Development Institute) in 1978, but his influence has shaped the course of my life to be a godly lay person as the salt and light of the world. My deep appreciation to him for his advice goes without saying.

His wife, Dr. Susie Kim, who is equally godly and influential to many as the late Dr. Linsu Kim, will now come to Malawi to help the Malawians learn about nursing.
What a small world it is... What an exemplary life she is also living... My respect for her commitment to living a godly life also goes without saying.
At Daeyang Luke Hospital, another project has been recently launched, namely Project Malawi. Director of Project Malawi is Mr. Jinho Kim who studied international development at Columbia University, NY in the states. I met him in Rwanda when he interned at UOB in 2009 during the summer. He is a bright young man with deep commitment to serving the Lord. Motivated by the call to serve the needy, he has made a proposal to KOICA and has received a significant amount of grant to launch Project Malawi.

For this project, he has also mobilized a variety of resources, including several scholars at Columbia University as advisors and a dozen volunteers from Korea and other countries for the project. The volunteers have impressive backgrounds. All were either medical professionals or graduate students in public health or economics. Dr. Hyunchul Kim's background was most unique. He is a medical doctor, holds a Ph.D. in Economics and also holds a master's degree in public health. He is one of the kind in Korea, I learned. He hopes to be an advocate of helping the poor through creative solutions in a global scale while teaching and researching at a school.
Under this project, Jinho Kim and his team are now conducting a baseline survey in the region where the Daeyang Luke Hospital is serving. Once the survey is done, the team will conduct several programs:
1) Build a shelter for the pregnant women who may stay there for up to one month prior to the delivery date. During their stay, the women will be trained with some business skills for their livelihood and sustainability. Micro credit may also be provided to help them start micro enterprises.
2) Conduct circumcision to men in the region (youth, young children and adults in that order) based on a recently proven research in that circumcision reduces the HIV/ADIS infection by 50%. This is a phenomenal impact to this deadly disease.
I had a short meeting with Jinho and all volunteers. My meeting with them inspired and challenged me greatly. They may not clearly know where they are going, but I trust that the God of goodness will put good hearts in them so that they may be used for His Kingdom beyond their current imagination. I prayed for His guidance in their journeys of life. - Jeffrey
[Note: I lost my camera in Malawi and I am regretful that I cannot share several photos that I took.]
Posted by jlee80111 at 5:49 PM

hi, this is a very inspirational piece. Can i publish it on my blog malawiace.com? Thanks

You are welcome to do so but please know that it was written years ago.