A Queuing Method for Election... 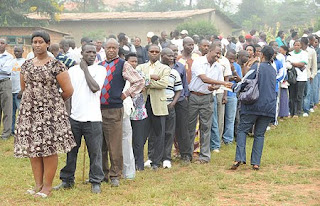 February 4th was an election day for Rwandan local authorities. "So what?" you may say. Well... when I heard how they elect their local authorities, I thought it was quite interesting.
All the candidates will line up in a row in the front and the voters line up behind the candidate whom they vote for. It is a way to save the election costs, but obviously there is lack of privacy. Since they are local people they know each other. At least the voters line up behind the candidates so that the candidates cannot (?) see who is NOT supporting him or her. ???
The national election commission personnel along with the national police will check the ID one at a time before they do the final counting. I have heard that some incumbent candidates who are not re-elected sometimes make commotion.
One disadvantage of this system is that they have to wait for quite long until the election is over. So all work places will start late today. Even banks will open at 1PM, instead of 8AM.
It was reported that 95% of the eligible voters turned up to vote and 62% represented young people to 25 years of age. From this election, 74,190 local leaders have been elected from 14,838 villages and cells nationwide.
Please note that this is the election system for local authorities, not for the president or parliament members. It is done through a secret ballot system.
It is a different system from what we know and it is interesting. - Jeffrey
Posted by jlee80111 at 5:13 AM

Thanks for sharing your post. How do they prevent corruption? In the Philippines, candidates hand out ballot forms with money stapled on to it. To make matters worse, this is generally accepted by the people and police because now they have money.

In Rwanda, the corruption is very minimal, if any. Even police officers are clean, compared to its neighboring countries. Umbutsman, reporting directly to the President, has even prosecutional power on corruption. This country is serious about fighting against corruption.