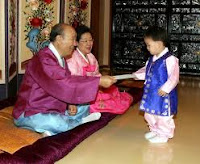 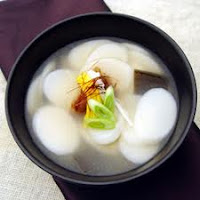 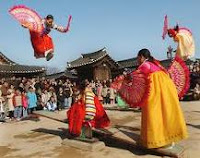 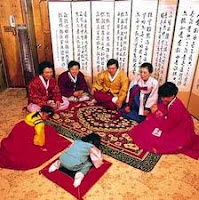 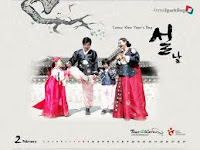 [Top to bottom, Left to right: Sliced rice cake soup... Girls playing on the panel (Nul-Ddwi-Ghi) ... Grandparent giving "blessing money" to a grandson... Little children bowing to the seniors... A boy playing "Jeghi" in front of two girls]
February 3rd is the New Year's Day in lunar calendar. The date changes every year since lunar calendar does not move regularly in parallel with solar calendar.
So what is the big deal? Well... at least 30-35% of the world population observes Lunar New Year. The Chinese people call it Chinese New Year as if they own it. They do not even observe the solar New Year at all. Koreans observe both, but people celebrate more on lunar New Year's Day, probably because many traditional customs are more observed on the lunar New Year's Day.
Different people have different customs in their celebrations, but Koreans eat sliced rice cake soup (Dduk-guk) and younger people make big bows to older people saying best wishes. The number of sliced rice cake soups you eat in the morning of the New Year's Day adds up to your age. Not really... but it is true that people make a joke out of it. Really. When children bow to their parents, uncles, aunts and even older neighbors, they receive some money. They call it "blessing money" or "Bok-don." So New Year's Day is one of a few times of the year children can collect a good sum of money. When men and women, boys and girls wear Korean traditional clothes. They may not be practical but surely are colorful. (In the photo)
Boys play a game of "Jeghi" made of sliced paper with an old coin or something slightly heavy as the head wrapped by the paper so that the head may fall first towards the ground. They kick it with the inside of their foot to see how many times they can kick without dropping the "Jeghi." Boys also fly the kites. Girls play the "Nul-ddwi-ghi." It is a game in that two girls jumping on two ends of a thick panel with something placed underneath the panel at the center, creating an angle so that two girls can take turn to see who can jump higher. It requires good skills in kicking the ground in a right timing.
Many people also prepare foods for their ancestors and bow to them in the photos as well. They even pour drinks. They pay respect to them and ask for their blessings. It was well depicted in a cartoon movie "Moolan."
Well... many of the customs may have faded away since the urbanization has accelerated, but there is an effort to restore the traditional customs also. Anyway, they are fond memories and I miss them. - Jeffrey
Posted by jlee80111 at 6:09 AM