A Trip to Maputo, Mozambique... 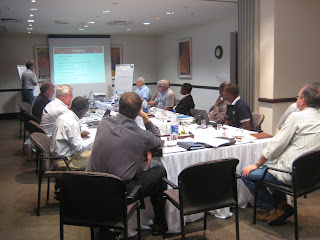 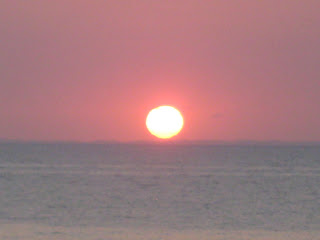 .....[A meeting with heated discussion.............][A gorgeous sunrise photo that I luckily took at 5AM.]
Kristin and I had a week-long trip to Maputo, Mozambique. I had to attend a 3-day OI Africa CEO conference and we wanted to take advantage of the trip.
Mozambique was colonized by Portugal so it is the only African country that speaks Portugese as the official language. Its size is similar to Turkey and twice as big as the U.K. Compared to its size, its population is 22 million, making it one of the lowest population density country in the world. Approximately 80% of its population is involved in agriculture that accounts for 25% of the country's GDP. Maputo is the capital city of Mozambique.
Surprisingly, the conference facility was right at the beach and we enjoyed the soothing sound of breaking waves for the whole week. In fact, we arrived at Saturday night and we went right to bed since it was past the midnight. Early in the morning, I woke up because the sun was too bright coming through the open curtains. So I got up to close them and found that right outside it was the ocean. Hurray!!!
Among all the experiences we had were these that we still remember: Wide open Indian ocean, endlessly spread white sand beaches, soothing sound of breaking waves, a beautiful sunrise, delicious seafood, warm and friendly people, colorful fabrics and traditional clothes, rice noodle dishes that we had at Spicy Thai restaurant, Central Railway Station, war memorial statue, The Iron House designed by Mr. Eiffel who designed the famous Eiffel Tower in Paris, botanical gardens.
The conference was very informative, as usual, and challegning to learn how other implementing partners are doing and also educational since we all learned from each other. I was delighted to see that many countries who had been suffering from frauds and broken morale are bouncing back to thrive on top of the past pain.
OI Africa has presence in 8 countries: S. Africa, Mozambique, Malawi, Tanzania, Uganda, Rwanda, Kenya and Ghana. Except Tanzania, all are doing better than before and two have arrived at the sustainable level and two are very close to the sustainability. Others have some work to do, but making positive progress.
A new venture starting in DR Congo will be the 9th country of microfinance operation in Africa. They shared the amount of challenges that they have to face and deal with on a daily basis. The country is extremely poor with only 1% of approximately 70 million people is banked, thus greatnly in need of microfinance to help the poor. Yet, this country has an incredible level of curruption (Corruption Percention Index of 167 among 182 countries), rampant internal and external frauds, and unbelievable amount of bureaucracy make it an enourmous challenge to operate. Many MFIs have gone into the country, struggling to survive.
OI is entering into this market with solemn determination to serve the poor, no matter what the environments may be. Senior managements are gradually being placed and polices/procedures are getting developed. The system is put in place and infrastructure is built around it. Lord's willing, we will open the door to the Conlolese within this year. We all prayed for God's blessing on this endeavour.
We all praised the Lord for sending and placing such high calibre of people as the leaders of all OI Africa implementing partners. Almost all of them are ex-bankers with many and also for the progress being made at all partners. - Jeffrey
Posted by jlee80111 at 5:08 PM