Rwanda is one of a few countries that have mountain gorillas. 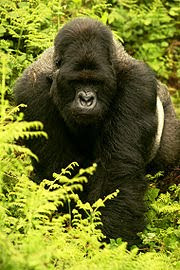 These mountain gorillas live only in the Virunga Mountains that spread through Uganda, DR Congo and Rwanda. Thus, trekking gorillas is one of the adventures that any visitors to Rwanda should do. We have been wanting to do it for some time, but frequent travel schedules and heavy workload have made us postpone it for some time. Fortunately, we have been able to do the mountain gorilla trekking before the year 2009 was over.
On Saturday, December 19th, Kristin, Joyce (our younger daughter)and I trekked one of the seven gorilla groups, called Hirwa, in the Virunga (Volcanos) Mountains. This group of gorillas, totaling 12, was led by the male silverback, called Munyinyo, that weighs approximaately 400 pounds. Male gorillas normally have blackbacks, but when they turn 12 years of age, part of their backs changes to silver color, thus being called silverbacks. One silverback carries multiple female gorillas and they form a group. The silverback leads his group to the places where food is available and to new nests everyday. He is the protector of the group and only he is allowed to mate with females within the group, until female gorillas are lured away by other bachelor silverbacks. [The silverback in the Hirwa group, weighing 400 pounds]
Rwanda has many gorilla groups, but only seven (7) groups are allowed for trekking and each trekking group can have only eight (8) people. So the maximum number of gorilla trekkers per day is 56, requiring advance booking and purchase of the tickets.
Gorilla trekking is not a casual hiking. It is pretty challenging and rigorous because you have to find the place where the target gorilla group is located. It takes climbing narrow paths on muddy hills, crossing bamboo jungles, walking on the bushes cut-down by the guides or scrambling several stiff hills on the way up. A couple of guides make pathways for the group, using machettes, and we followed them, up and down the stiff hills. We all got our clothes and shoes dirty with muds, but we were able to find the gorilla group and had a close encounter with them. Normally they eat bamboo shoots and other vegetables during the day.
At one moment, our group saw a female gorilla, weighing approximately 200 pounds, passing by within a foot distance from the group. Mountain gorillas are vegeterians, but they are wild animals and at times they could ferociously charging at people if they are provoked. I do not believe the evolution theory, but when you see the gorillas that closely, you 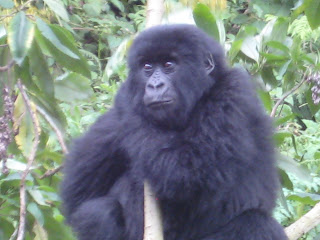 cannot resist a little strange feeling about their resemblance to human being. It was quite interesting that each gorilla was identifiable by note prints unique to individuals, like unique fingerprints of each human being. These mountain gorillas have very slow reproduction cycles and are categorized as "critically endangered" species according to the U.N. classification.
[A baby gorilla]
Our group had a shocking moment once. The silverback, weighing 400 pounds, is normally sitting at a place overlooking the group. All of a sudden, this silverback started moving swiftly crossing the valley where we were busy taking photos. The guide instructed us to move out of his way, but one Belgian lady did not hear him in time and ended up being pushed aside by the silverback. Although it was a slight push, she fell down and rolled into the bush. We all became frightened, but that was the end of the encounter. It all happened so fast that no one could do anything about it. We all felt reliev 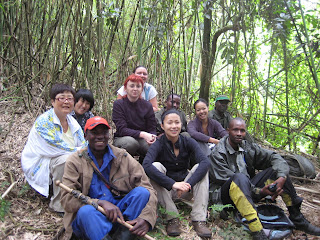 ed. The guide explained that the silverback was not mad and his rush was not a charging at us. He simply decided to move from one hill to another hill for whatever reason and the lady happened to be on his way. He told us that the silverback gorilla's abrupt behavior was his first time experience.
[Our group, plus 2 more taking photos, with the guides and armed guards]

All in all, we trekked the gorilla group for two and half hours, spent one hour watching them and another one hour to come back down. We all received the gorilla trekking certificates and I bought the wooden stick that I was allowed to use for trekking as a sovenir. It has carvings of three gorillas. It was an once-in-a-lifetime experience, particularly for Kristin who initially suffered greatly from a heart pain. But, she was able to finish it with a lot of help from a porter, Andrew. - Jeffrey
Posted by jlee80111 at 5:56 PM