Hope Through the Eyes of Children...

On Saturday, December 5th, there was a photo exhibition organized by a ministry called "Hope Through the Eyes of Children." This was started by a couple of Christian ladies, namely Linda Smith and Angela Kim. Both are from New York, U.S.A.

They visit primary and secondary schools and have the children identify those in financially difficult and seemingly hopeless situations. They then lend these needy children cameras to take photos of other people and/or things. The photos are developed for sale directly to other people or through exhibition in Kigali or in other cities in the U.S. The ministry provides camera and printing for free for the needy children so that they can generate income for their family.

Almost all of them are victims of the 1994 genocide, directly or indirectly, and/or the HIV/AIDS. These needly children learn not only how to generate income but also how to have hope in seeminly hopeless circumstances through the sharing of the Gospel. It is a mission, a holistic one.

Kristin and I were invited to this photo exhibition and saw many photoes taken with hope through the eyes of (seemingly hopeless) children. 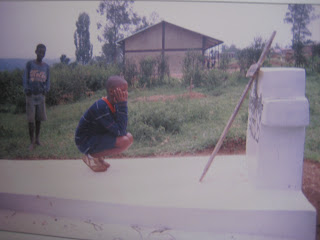 Let me share a story among many at the exhibition.

[A photo taken by Odila]

Odila Umuziranenge is a 15-year old boy attending Gilomero Secondary School. He lost his dad in 1996 and his mom in 2004. Both died of AIDS. He is the youngest of 8 children and lives with the HIV/AIDS. They own no house, no piece of land. His older brothers and sisters all work to make a living. Odila earns some money to buy food and to pay for the tuition through the photography. But, he finds hope in Jesus Christ. --- Jeffrey
Posted by jlee80111 at 5:43 AM