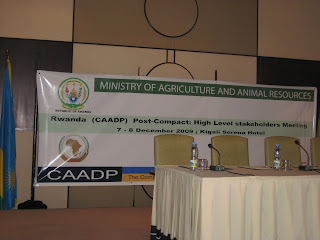 On Monday and Tuesday, December 7th and 8th, 2009, John Magnay, Special Advisor to OI Africa on Agricultural Finance (See another blogpost about him) and I participated in the Post CAADP Compact High Level Stakeholders Meeting held at Serena Hotel in Kigali, Rwanda.

CAADP stands for Comprehensive African Agricultural Development Program. Rwanda was the first country to sign the Compact in 2007. It is the initiative made by African countries that emphasize on the Country-initiated, Country-driven, Country-focused agricultural development program. This compares sharply with the traditional methods where donor country-initiated, donor country-driven approaches.

To be able to adopt this methodology, a particular CAADP member country has to prove that its governance is trustworthy, its fiscal management is transparent and the outcome is highly effective. It sounds very challenging in light of the past experiences in African countries.

The meeting was to showcase the Rwanda's success story. The President of Rwanda, His Excellence Paul Kagame was the keynote speaker and also in attendance were his Prime Minister, Chief Justice, all ministers and a dozen ministers of agriculture from other African countries along with many international development partners from the U.S., U.K. Canada, E.U., AfDB, IFAD, KOMESA, World Bank, United Nations, World for Peace etc. Even the special advisor to the U.S. President was present, indicating the importance of the meeting.

If it was only Rwanda's show-off of their success story, it could have been another "Yeah... right." story, but almost all participants congratulated on the Rwadan success and saluted to the government officials. To date, almost everyone who knows Africa has said that the "green revolution" has never materialized in Africa, but at this meeting, many mentioned the green revolution in Rwanda. It was pleasing to my ears.

In 2009, Rwanda, for the first time, saw the production of crops exceed the consumption needs. It was commendable in light of the food insecurity prevalent in most African countries. The impressive result was the combination of many efforts, such as terracing, fertilizer use, input system improvement, irrigation, land consolidation for more effective farming, soil eroision protection, suitable crop farming for the soil quality etc.

Agriculture is essential to Rwandan economy because:

Rwanda's Ministry of Agriculture presented its Strategic Plan for Agriculture Transformation (PSTA II) to the international development partners and showed the gap in funding needs of $325MM for the next three years. And the Ministry of Finance officials presented how the government is monitoring and reporting on the use of the funds. To me, it was pretty transparent and convincing. Apparently so was the case to all other deveopment partners.

After all presentations, the Minister of Finance asked for any pledge or commitment of new capital to bridge the gap. Most of the international development partners pledged their commitments for continuing support with some indicating the specific amount. E.U. pledged the most significant amount of $150MM in new capital for the country.

I was proud of the Rwandan government officials for presenting their exemplary cases calmly, logically and straightforwardly. Their presentations were impressive and their transparency was so apparent. It was not just I who felt that way. Even ministers of other countries did not spare their compliments to the Rwandan government. A country's minister said that they could use Rwanda's case for their own country.

In summary, Rwanda showed the world what they resolved to do, what they actually did, how they implemented the plan, how impressive the results were, how accountable and transparent they are in using the aid money, what the additional funding needs are, and they asked for the international development partners' support. What a way to provide opportunities for the international development partners to make good and effective use of the development dollars. So much money has been poured into African countries, yet so many countries are poorer than before. Now Rwanda is showing a difference. I sincerely prayed that Rwanda would remain on the course of the current development to be an exemplary African nation to be recognized by the world as well as other African countries.

The two-day meeting was very informative to me in witnessing, although extremely fractional, how the international development partners think, approach and measure the performance of the countries that are in need of foreign aid. - Jeffrey
Posted by jlee80111 at 11:21 PM