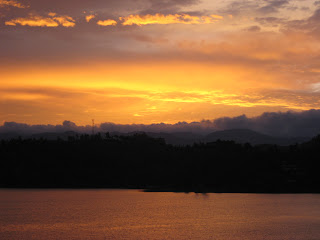 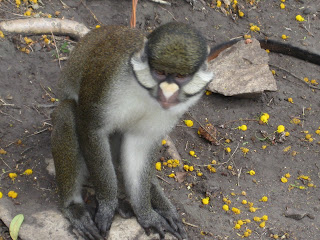 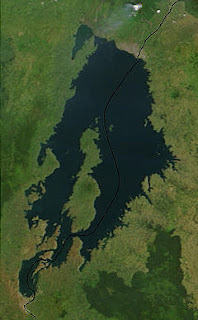 April 25th was our 26th wedding anniversary. We decided to celebrate it over this weekend because May 1 is the national holiday (Labor Day) in Rwanda.
Kristin and I made a short trip to Lake Kivu, about two and a half hours drive to the West from Kigali. We stayed at the Bethanie Center, a retreat center for Presbyterian Denomination.
The trip was short but sweet. After we cheked in, we sat out on the balcony outside our room. The breeze was so smooth and comforting that it reminded me of the Hawaiian trade wind. Kris and I sat out there until it became dark, enjoying the breeze. We had a dinner at a nearby restaurant located at Moria Hill Resort.
In the morning, the sunrise was spectacular, as seen in the picture. The breeze was so caressing as usual. Ahhhh... We enjoyed our quiet time over the bible in such a wonderful morning breeze and in such a spectacular sunrise scenery. We prayed for the Lord's hand-holding with us for the rest of our life together. We could easily forget the fight we had at night against the mosquitos. Nobody likes bug bites, but over here people are far more sensitive to mosquito bites than anywhere else because of the concern over Malaria and Dengi that mosquitos are known to spread.
Even though we changed our plan to come down after one night, rather than two nights, we felt great about the short trip. Before we started driving back, we rode a boat to a tiny islet, called "Amahoro (Peace) Island and Camp." There, one family and a couple of workers were living to rent the camp sites for visitors and sell food and drinks. People visit there for a quiet retreat in the middle of the lake. There was only one animal on the island, a monkey. (the picture) I talked to the owner of the island and called him the Umuwami or King of the island. He laughed, slightly nodding. I said it because whoever visits the island has to pay RWF500, a little less than $1.00 as a duty. Well... now you know why I called him a king.
The Lake Kivu is a long lake from north to south. Its length is 55 miles (89 km) and its maximum width is 30 miles (48 km). Its catchment is 2,700 sq. miles (7,000 square km). Its average depth is 787 feet (240 m) and the maximum depth is 1,575 feet (480 m).
As I wrote earlier in my previous blogpost regarding the visit to Karongi Office, the Lake Kivu is sitting on a valley that is tearing apart so volcanic activities are suspected in the lake. Probably because of this volcanic activity, the Lake Kivu is known to contain 72 billion cubi yards (55 billion cubic meter) of methane gas stored at the depth of 300 meters.
This methane gas poses a great danger to the people living at the shore, estimated to be millions. Once the lake overturns, believed to occur every 1,000 years, the gas leaks out and creates a great hazard to people. A similar incident occurred in Cameroon, killing approximately 10,000 people. The Rwandan government is trying to extract the methane gas to generate power. Once successfully done, it could surge the country's power generation capacity by 20 times and could export the power to the neighboring countries. That would be great! May that happen!
On the way back, we picked up three young Janapense ladies who are volunteers from Japan. One was working in Kibuye and we dropped her in Kibuye town. Two were staying in Kigali so we have given them a ride all the way to Kigali. The two ladies we rode with were helping street children in Kigali and deaf children. (I will talk more about Korean volunteers and Japanese volunteers later.)
We were grateful to have completed the trip safely. It was our first long distance driving trip in Rwanda. - Jeffrey
Posted by jlee80111 at 6:23 PM

My family being in Rwanda i have had the chance to go to the Island. The monkey was real fun and he did have a few tricks, like catching whatever you threw at it and throwing it back too.

I dont remember having paid the 500 Frw any of the time we had been there. Rwandans do know to Tax Muzungus better than Muhindis. Do ask him why the 500 Frw next time you are on the Island. I dont know if its a new introduction as the last time i went was around 2 yrs back.

Thank you for leaving the comments. I am glad to hear that you had a good experience with the monkey and the island. Apparently the "duty" is a new thing. We did not want to argue so we have give them the money. How long have you been in Rwanda? Where do you live? What do you do here in Rwanda? Jeffrey

You are in our thoughts and prayers at LCC. Congratulations on your wedding anniversary! We look forward to seeing you in a few weeks for Amanda's wedding. Sarah is due in just a couple of weeks, so she probably won't be able to attend the festivities. I look forward to being a part of your family's great day! See you soon.

Matt and the LCC Family

Dear Pastor Matt, thank you very much for your congratulatory comments and prayer support. We are indeed excited about Amanda's wedding and we greatly appreciate your presiding over their wedding. We will see you soon in Colorado. Shalom in the Lord. Jeffrey

Hi Jeffrey and Kristin, this is David Hsueh from LCC. As a part of the men’s bible study group (we call ourselves “the Habaneros”), which includes Rick Kwon, Joe Yang, Alex Lim, Bob Park, Andy Lee, Peter Kim, Minsu Park, Mike Kim, Jason Chung, and Phil Park, we have decided to adopt your ministry to encourage and pray for you. As a part of our agenda every Tuesday night, we keep the group updated with your posted messages on your website. You are always in our thoughts and prayers and we hope that you will share with us your ongoing prayer requests and praises. God bless! P.S Congratulations on your wedding anniversary!

Dear David and Habaneros, it is a wonderful blessing to have a group of godly men praying for us and ministries! We are indeed grealy encouraged. Greetings to all members of Habaneros. Jeffrey and Kristin

been associated with Rwanda for the last ten years my parents and Sister live there right now. Me and my wife are completing some exams here in India.Coming back in June/July. We live in Kigali(the whole family)

The family is into business consultancy and Technical Consultancy( Parents and sister CPA, me and wife engineers), we are also into realty and logistics.