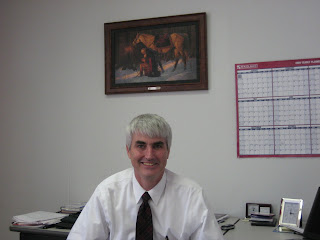 My three-day trip to Memphis, TN was not for Elvis Presley as many are doing it since the city is home for the so-called "emperor of rock 'n roll." It was to meet many Kingdom people and businesses.
I interviewed two businessmen who run their businesses for the Kingdom purposes. They are Tom Phillips (Pictured) and Alan Barnhart. What a blessing to know them and to know there are such people! Meeting with them and learning about their stewardship was great encouragement. (I will write about these businesses and businessmen separately. )
On May 21st, I spoke at Independence Presbyterian Church over lunch. Approximately 200 people gathered and I shared with them what the Lord has done in my life, what the microfinance is and how the Lord is working through UOB. Many came to me and said it was a blessing and challenging. Praise the Lord!
Later on the same day, I spoke to approximately 40 people of "half-timers" or "middle-adults" as they called themselves at Second Presbyterian Church. A lively question-and-answer session followed my 40-minute presentation. All are seeking to serve the Lord more and better than now. May their hearts be filled with passion for God and compassion for people! 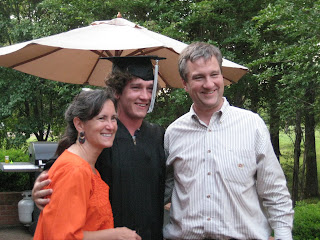 I was invited to a dinner at the home of the Barnharts, and witnessed the love and harmony that a beautiful godly family can have. They have six children, including two who have been adopted. The oldest, Nicolas, graduated from U of Tennessee, but he chose not to walk at the ceremony because he wanted to be with his younger brother (Nathan) who graduated from a high school. So the family wanted to hold a family version of the graduation ceremony. We all were invited to give him a few words of wisdom and advice. He was so sincere in listening to them all and he later burst into tears, thanking everyone for the special memory that he was given. What a delight it was to meet such a young man with passion for God and to be with a godly family! Thanks be to you, Lord!
On May 22nd, I had a breakfast meeting with three men of God together with Mike Brassel of OI US. One senior pastor, one Ph.D. in agricultural engineering and one expert in sewer treatment. They all desire to serve the Lord's Kingdom with the talents bestowed upon them. Currently, they are ministering in Ghana and Afghanistan(?), and desire to expand their services. Bless their hearts!
I spent more time with Alan Barnhart and his business facilities in the morning. I could surely say that God was indeed blessing the business as I was listening to the stories being shared. I can't wait to write about it!!!
On the same day, Mike 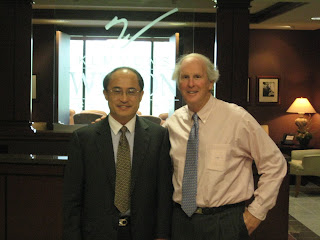 of OI US and I had lunch with Kem Wilson, Jr. who is a strong Christian leader in Memphis. He is one of the sons of Kim Wilson, Sr. who was the founder of the famous Holiday Inn. The franchise has been sold and is now owned by Inter-Continental Hospitality Group, but their legacy still remains. Through the hospitality expertise, he and his businesses desire to serve the Lord's Kingdom. I learned that he will provide the hospitality training for the people in Musanze, Rwanda. Blessings to him!
Over dinner, I spent time with Donnis, Director of Missions of DCI, run by Tom Phillips. Yes! There is someone who is in charge of missions at a business. Indeed, it is a Kingdom Business and a Great Commission company. Praise the Lord!
I was physically exhausted, but my spirit was lifted up high. Thank you, Lord, for your goodness in nurturing such godly people all over the places. May their stories be shared more widely so that more people follow You as good stewards and through them your Kingdom may advance further and faster on earth! - Jeffrey
Posted by jlee80111 at 3:21 PM