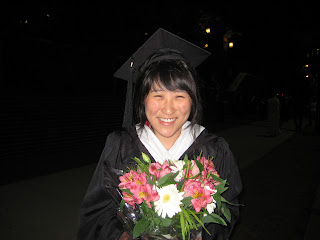 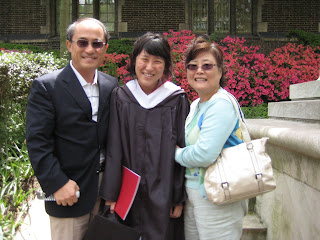 It was a blast to celebrate the graudation of Joyce!
Joyce has graduated from U Penn with two bachelor's degrees: one business degree and the other degree in visual studies. There were two excercises of graduation for two different schools and Joyce was supposed to walk twice. Unfortunately, the hood for the business school (Wharton) did not arrive and she did not want to walk without the hood. Understandable. The keynote speaker for the Wharton School was Professor Yunus and that... I missed. Just in case you may not know him, Professor Muhammad Yunus started the famous Grameen Bank in Bangladesh and received the Nobel Peace Prize together with Grameen Bank in 2006 for his/the bank's contribution to "create economic and social development from below" and expand the peace among people. With it, he made the microfinance known to the world. He is known to be the guru of microcredit in the world.
Interesting is his name. His name is the same as "Jonah" in the Hebrew bible. Yunus or Jonah appears also in Quran with a story very similar to that of Jonah in the bible, but a little twisted. Here is the Quran that depicts Yunus:
His story is recounted in Surah Saaffat (chapter) 37 of the Quran, verses 139 through 148. The English translation below was done by Abdullah Yusuf Ali.
139 So also was Yunus among those sent (by Us).
140 When he ran away (like a slave from captivity) to the ship (fully) laden,
141 He (agreed to) cast lots, and he was condemned:
142 Then the big Fish did swallow him, and he had done acts worthy of blame.
143 Had it not been that he (repented and) glorified Allah,
144 He would certainly have remained inside the Fish till the Day of Resurrection.
145 But We cast him forth on the naked shore in a state of sickness,
146 And We caused to grow, over him, a spreading plant of the gourd kind.
147 And We sent him (on a mission) to a hundred thousand (men) or more.
148 And they believed; so We permitted them to enjoy (their life) for a while.
Not exactly the same as the bible, but I thought it was interesting.
The School of Arts and Sciences, the largest school in U Penn had John Legend, a famous soul singer with three Gramy Prizes and a U Penn graduate, as the keynote speaker. His speech was pretty good. All things were good and wonderful. Even the individual walk of over 1,300 students was bearable. But, the ceremony was held in the evening (Sunday May 17th) and it was freezing cold. But at the end, it was a great feeling. 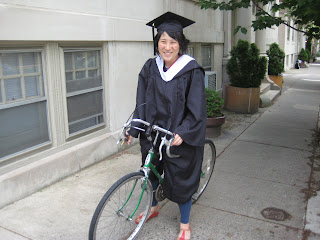 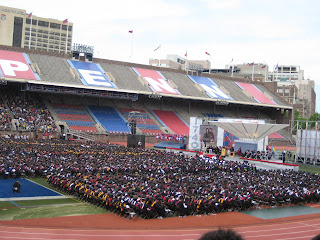 On Monday, the University commencement took place. Among the honorary doctors were Professor Yunus and the Google CEO Eric Schumidt along with a few others. Eric Schumidt was the keynote speaker. Undoubtedly, he has made a great contribution to the humanity with Google. As the chief executive of the most popular search engine in the world, he ironically urged the 6,000 Penn graduates to "turn off the computer and cell phone to live in analogue for a while to feel the human touch." Good thought. He was a good speaker.
Kristin and I were grateful that Joyce was able to finish the college within four years at one of the most competitive schools in the world. We were proud of her. More that anything else, though, we were so grateful that the good Lord has been walking with her, holding her hands throughout the journey.
In this tough world of economic uncertainties, getting a job remains a great challenge; however, I trust in the Lord who will guide her in the way that will be the best for her in His eyes. It is my prayer that she will continue her search for a job not following her own desire and interest, but seeking the wisdom from the Lord. I hope she will be led to a job that will help her make contribution to the society and His Kingdom. I trust in the good Lord. Thank you, Lord!
- Jeffrey
Posted by jlee80111 at 4:07 AM