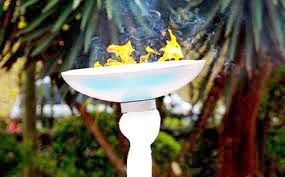 As many of you know, Rwanda went through the genocide against Tutsis in 1994. Approximately 10,000 people were slaughtered every day for 100 days. It is recorded as the genocide that has progressed fastest in human history.

Every year, there are commemorations starting on April 7th and lasting until July 4th, the Liberation Day. The formal mourning lasts for a week, but the overall atmosphere is somewhat gloomy and solemn until the Liberation Day. During this period, some people, particularly genocide survivors, have the flash-back memory of the horror and go through traumas.

2014 will be the 20th anniversary. So the Rwandan government has planned and launched a new program. It is called Kwibuka Flame. Kwibuka means "Remembrance" in Kinyarwanda. On January 7th, there was a special ceremony at Gisozi Genocide Memorial where more than 200,000 people are buried. The Genocide Torch, also called Kwibuka Flame, was lit using the Rwanda's traditional way of making fire, called Urushingo. It will be carried by boys and girls who are younger than 20 years of age to all 30 districts. After the tour, it will return to Gisozi Genocide Memorial on April 7th and will be used for the special commemoration to take place on the day. 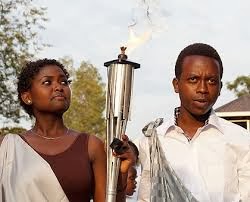 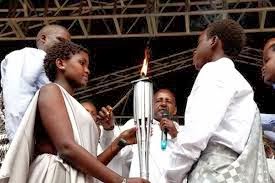 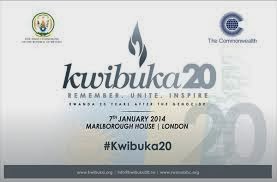 The fact that the torch will be carried by boys and girls of 20 years or younger signify that this generation of people who did not go through the genocide can be united. One Rwanda and One Rwandan.

This year's theme is Remember - Unite - Renew. The message seems obvious but I read it as a message to remember the genocide, unite as one nation and renew the determination and courage to never repeat the genocide again.

'Never Again' has been emphasized over and over as the theme not to repeat this horror again ever.

The minister of foreign affairs and government spokesperson, Louise Mushikiwabo, delivered the key note speech on January 7th. Her message summarizes the spirit and intent of this year's theme and Kwibuka Flame:

"As we turn our attention to the twentieth commemoration, we invite the world to remember with us. We do so not to inspire pity or guilt, but rather because the lessons of 1994 have resonance far beyond Rwanda's borders. It is a time to recommit ourselves to the simple but powerful idea: Never Again. Not just for Rwanda, but for the world. For 'Never Again' to be a reality, and not just words, 'Never Forget' must also be our creed."

It is my prayer that a genocide will not occur again anywhere in the world. Ever. - Jeffrey