Rwanda is a small country in the heart of Africa, the size of the state of Maryland in the U.S. Its terrain is mountainous with thousand hills. So Rwanda is called the Land of Thousand Hills.

Rwandans value their marriage. It is a holy matrimony and people spend a lot of time for planning and significant amount of money for wedding.

Rwandan wedding has three ceremonies. They are traditional, religious and civil wedding ceremonies. "Wow"... you may say. And it is indeed "Wow!" 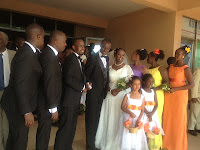 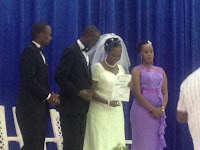 Traditional wedding is done with the bride, the groom and their families wearing traditional clothes, called mushanan. Traditional wedding involves mutual introduction and dowry giving. Dowry is given in  the form of cow. Cow? Yes. The number of cows determines how much the bride is valued. Of course, people living in the urban areas may give the dowry in money but equivalent to the price of the number of cows the groom gives to the bride's parents. There are a lot more steps and philosophy built into this ceremony and if you want to learn more, click here  This blog will give you detailed steps involved in the Rwandan wedding process.

Religious and civil wedding ceremonies are many times combined. It was interesting to find out that the bride and the groom were seated along with their bride mate and the best man facing the crowd.

After the religious and civil wedding ceremonies, a reception follows. Reception is filled with music and dancing. 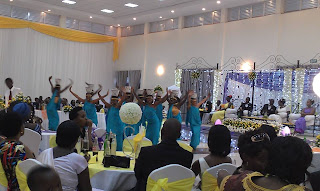 Yes, it is costly and is a huge barrier to the poor people. It is a good custom but creates a tremendous burden for a lot of people.

Two of UOB staff got married after a long "obvious" but secret dates. I am supposed to be a father figure for them. I attended their church wedding but borrowed some photos of their traditional wedding to show you what the wedding looked like. Congratulations, Kamari and Alida! - Jeffrey
Posted by jlee80111 at 6:18 AM