Reunion with Drs. Julie and Wonsuk Mas in Oxford

Dr. Wonsuk Ma is Executive Director at Oxford Center for Mission Studies (OCMS) in Oxford, England. He has been leading this institute for the past six years. OCMS coaches and grants students PhD degrees in mission studies. Dr. Julie Ma is the wife of Wonsuk and a professor at OCMS. They both graduated from Fuller Theological Seminary in Pasadena, CA with their PhD degrees.

But, what is more significant to Kristin and me is that they both attended the same church when we were living in Los Angeles. It was in the early 1990's when we were attending the same church. Since then, we have gone our own ways as the Lord has led and we have not seen each other for almost two decades.

Thus, our reunion was joyous.

The Mas were missionaries to the Philippines for more than two decades before he accepted to lead this historically important institution six years ago. Their field experiences plus academic background made their qualifications stood out. OCMS, once struggling, is now stabilized and begins to thrive. Praise the Lord! 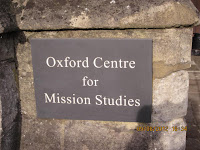 OCMS is located at the former St. Phillipe and St. James Church building, that just celebrated its 150th anniversary. Every corner and floor spaces are used for the OCMS staff or faculty offices. OCMS remains significant to the mission academia because it has been the pioneer in holistic mission, as acknowledged by the late John Stott.

We had a delicious dinner at the Kings Arms Restaurant located right next to the Thames River. We ended up being treated by the Mas, gratefully. We both praised the Lord for His faithfulness in our lives through countless number of blessings, with many in the form of miracles. Julie Ma went through a couple of medical situations that were diagnosed by doctors to be hopeless, but she has been cured in both situations. Hallelujah!
We agreed that we were grateful for the fact that we are being utilized for His Kingdom and His ministries. Until we have to pass our torches at the opportune time, which we have to discern well not to miss His timing, we would put our best efforts to carrying out the responsibilities He has bestowed upon. Amen! - Jeffrey
Posted by jlee80111 at 9:18 PM