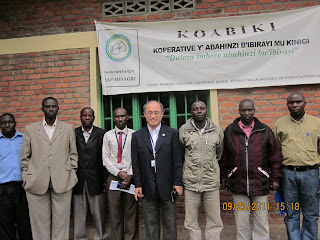 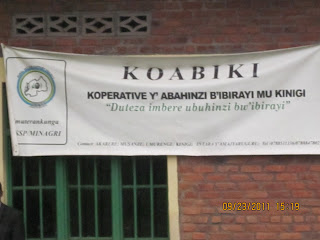 On Friday, September 23rd, I made a trip to Musanze, the north western hub in Rwanda, to visit UOB staff at Musanze Regional Center and to meet the Irish potato farmers. Emmanuel Mugandura traveled with me as an interpreter.
Musanze Regional Center houses Musanze EBU (Entrepreneurial Business Unit), Musanze RSC (Regional Support Center) and Musanze Branch, with a total staff of 21.
Musanze EBU serves over 4,000 clients in six districts: Musanze, Nyabihu, Rubavu, Ngororero, Burera and Gakenke through 11 relational staff while Musanze Branch serves an additional 2,000 clients since it was opened in early 2011.
Our meeting with the staff lasted for about three hours, centering around the bankwide performance update, new products and services under development, listening to their feedback on new products, their opportunities and challenges, and their requests.
After the meeting, we visited Irish potato farmers in Kinigi, a sector in Musanze District. This is where you begin your mountain gorilla trekking. We provided input financing for 47 farmers through KOABIKI cooperative about four months ago and the first cycle is ending soon. I wanted to talk to the cooperative leadership about their experiences on farming this past season and with UOB.
We began the meeting with a thanksgiving prayer to the Lord whom we worship together. I was delighted when Emmanuel, the chairman and president of KOABIKI, suggested that we begin the meeting with a prayer. Several members who attended the meeting as KOABIKI's leadership were all Christians!
This past season, they faced several challenges in growing Irish potatoes. First, they had a drought in early growing season; second, they had unexpected rain that also damaged the crop and third, they had a disease in late growing season that most adversely affected the harvest. Nonetheless, Emmanuel, the cooperative chairman and president, said that he was thankful to God who has kept the damage to the level that most of the cooperative members are able to absorb. The technical adviser to the cooperative said that 70% of the 47 borrowers were able to increase the yields significantly thanks to the input financing provided for them. We praised the Lord!
They made a few requests and we all agreed to expand the relationship. The cooperative has 76 members and this season up to 60 members will apply for the loan.
We are planning to scale up our input financing for Irish potato farmers in the region, including Nyabihu, Burera, Rubavu Districts, in addition to Musanze District. May God continue to be gracious to them in transforming their holistic lives! - Jeffrey
Posted by jlee80111 at 5:57 AM