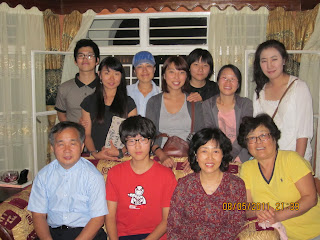 When I first came to Rwanda, I started a bible study with three KOICA volunteers: Jooheum, Jihoon and Sangmin. Later, Junghee joined. With Kristin, we had a wonderful time of blessing through this bible study. We named it Shalom Bible Study or SBS.

After one and half years, they all went back to Korea. But it was a send-off of SBS graduates to live a godly life like light and salt of the world in Korea where materialism and worldly temptation are high. They all are doing well, living a victorious life.

After they left, the SBS members changed quite a bit. All male membership changed to predominantly to predominantly female membership. Yurim joined us while they were still with us. Anna later joined us. Then, Seungback, Eunyoung, Minjung and Isaac came to study the bible together. Even Rev. Myungha Hwang joined the SBS. Also, Hyosu, Saerom, Jihye, Hyeyoung, Minki and Esther followed the suit. The bible study group became too big to meet in our living room and to maintain the intimacy of a small group bible study.

So, we chose to split the SBS into two groups according to the principle of multiplication. The split occurred in July 2011. I continue to lead a group and Rev. Hwang will lead the other group. It was not easy but everyone understood the reasons and accepted it.

Meanwhile, Eunyoung got injured when she slipped around a pool and was taken back to Korea as she was about to return to Korea after a 2 and a half year service. She became the 5th graduate of the SBS. Jaeyoung and Seungback also went back to Korea.

Tonight's SBS was the farewell and send-off for Saerom who returns to Korea around the midnight. It was also the welcome to another missionary family: Dr. Minsu Koh, his wife Aesim and his son Kyungchul. Missionary Koh is a vet doctor and has responded to God's calling for mission and came to Rwanda. The photo above was taken after tonight's bible study.

It is a blessing that the SBS has been growing to split and to send off several graduates.

May God bless and multiply the SBS in Rwanda to be a community for raising Christ's ambassadors of the gospel! May they live a godly life and be a blessing to others! Amen! - Jeffrey

It's good that ur doing that. I hope I can do things like that in the future! God bless you!!!