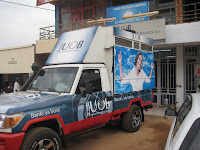 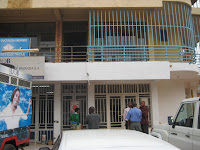 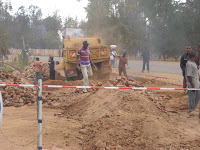 [Tenants were locked out.... This was the construction that should have been done... Mobile Branch pulled in to temporary relief.]

On Wednesday, September 1st, I was informed that one of the bank branches in Kicukiro District was closed down by a District Mayor.

"What?" "Why?" "What did we do wrong?" .....
"What?" "We did not do anything wrong?"
"Then what made him close down a bank branch?"
"Wait... wait..." "Does he have authority to close down a bank that is a semi public institution?"
The reason, as I was explained, was unbelievable. Incredible. Totally irrational and unreasonable to me.
Apprently, the District ordered the landlady of the building where our branch is located to lay tiles on the sidewalk in front of the building. The landlady had delayed the construction work due mainly to lack of funding and ended up passing the deadline, August 31st, imposed by the District. On September 1st, the District Mayor came to the building himself and placed locks on the doors of all tenants. Effectively he himself shut the entire building down.
"Have we been informed of the District's instruction to the landlady?" My questioning continued. "No."
"Have we been informed of the District's plan to close down the building if a certain action is not taken?" "No."
"It just happened", I was told. Nonsense... Total nonsense...
'How could a semi-public financial institution be shut down by a local authority for a reason that the bank has nothing to do with?' I was upset. Upset with the fact that we cannot serve our clients who have entrusted their money with us.
'How could we say to the general public that the financial stability is assured since their money is available any time they need it, when a bank branch can be shut down by a local authority in such an unreasonable way?'
I decided to bring the matter to the attention of the central bank governor. I called him at his cell phone. I use his cell phone only when there is an emergency. It was an emergency to me and to us because we could not serve our clients for no clear reason and it could adversely affect the reputation of the entire Rwandan banking system.
After I explained to him about the situation, I was expecting a reasonable explanation and a workable guidance to resolve the matter. I was naive. He agreed that it was unreasonable and excessive. But it was obvious that he was avoiding any conflict or confrontation.
I instructed the branch banking division manager to bring the mobile branch to get ready to serve our clients if we fail to convince the District Mayor to allow us to open the branch from today (Sept. 2).
We were unsuccessful eveb with our attempt to meet him yesterday (Sept. 1). So today (Sept 2), we served the clients through the mobile branch. Even that action was with the temporary verbal approval from the Vice Mayor since the Mayor was not available. We are hopeful that we will resume the branch operation from tomorrow (Sept. 3) because the landlady started the construction immediately yesterday (Sept. 1).
There is another background story behind this irrational action that the District Mayor took upon us.
The current President Paul Kagame of Rwanda has been re-elected for another 7-year term with a land slide victory. His inauguration is scheduled for Monday, September 6th. Apprently all city officials have been working extremely hard to complete all construction and decorative work in the city prior to the inauguration. The building where our branch is located is prominent in the area. Thus, it drew special attention from the District and when the District's instruction did not produce results, the Mayor took extreme actions that ended up falling hard on the laps of innocent tenants, including a semi-public financial institution.
Since I was convinced that such nonsense action was not the intent and instruction of the President Paul Kagame, I could swallow it. But it was not easy. I had to remind myself several times: "T.I.A. - This is Africa."
Moreover, there are plenty of nonsense situations that are happening in our lives. ... Somehow the murder of Jesus came to my mind. The murder of Jesus was plotted by the religious leaders and strongly supported by the crowd who experienced His miracles and were anxiously waiting for the Messiah, not knowing Jesus was the Messiah. It was a total, absolute and reidiculous nonsense, if you come to think of it a little deeply. He was murdered on ridiculous charges. Even the Roman Governor Pontius Pilate claimed that he could not find any sin in Him. Nonetheless, He was crucified. But we know now that it was the divine redemption plan for sinners like you and me! ... Amazing grace...
Well... I feel a lot better now in swallowing this incident. Thank you, Lord! - Jeffrey
Posted by jlee80111 at 9:41 PM

Wow... what a story! Hope it's up and running again. Praise God for the availability of the mobile bank!