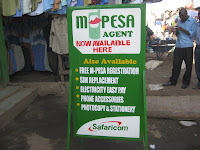 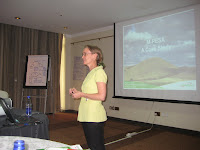 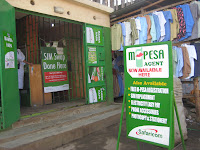 [A sign in front of an agent .... A typical M-Pesa agent ..... Pauline, Head of M-Pesa Operations, a briliant manager]

Everybody knows that Bill Gates is the founder of Microsoft. Most everybody knows that he and his wife, Melinda, founded their private foundation that is the largest in the world with $33.3 billion in endowed fund. In 2009, they gave $3 billion for various causes globally related to health, development and education.

I participated in a 3-day workshop in Nairobi, Kenya (September 8-10), sponsored by BMG Foundation on the topic of "Savings Initiative" for the MFI's to help the poor. Several MFI networks participated in the workshop to learn from each other and Opportunity International was one of them. I, together with the CEO for Opportunity Kenya and one of the Opporutnity International Africa Regional directors, represented the OI. Other networks that participated in the workshop included World Vision, FINCA, ACCION, Grameen Foundation and Women's World of Banking. The participants totaled 25.
The theme for this workshop was "Change Management." Traditionally, MFI's focused on extending credit to the poor. About a decade ago, a movement started to promote savings as a way of helping the poor strengthen their financial stability. To receive savings from the general public, MFIs had to be regulated by the central bank, which required significant changes in their mentality, corporate culture, MIS, attitude towards customer service, etc. Change requires a shift in paradigm and creativity.
The primary focus was on M-Pesa and Equity Bank, two legendary success stories both based in Kenya.
M-Pesa is a business division of Safaricom that owns a predominant 88% market share of the wireless communication industry in Kenya. "Pesa" means money in Swahili. Obviously M stands for mobile. "M-Pesa" means "mobile money." Now the M-Pesa subscriber has exceeded 11 million out of the country's 40 million population. Phenominal!
M-Pesa has revolutionized the payment habbits of Kenyans. Through M-Pesa, using their cell phones, they can now send money home in remote areas; make payments to buy grocery; to pay school fees; to pay for the taxi fare; to pay to the suppliers for the goods that they buy; to make donation; to pay for the utilities; etc. All instantly. Not only people can do these remittance/payment transactions instantly but also can they access to cash at one of 16,000 agents scattered around the nation. A remarkably huge network! Moreover, they have developed a way for cell phone holders to be able to access even ATMs without card and pin! How? I am not going into details. It is getting too technical, but it is working now. Amazing...
The latest product or service is the connection between M-Pesa and Equity Bank so that now people can move money between the bank account and M-Pesa account. This product is called M-Kesho. (Kesho means "tomorrow") In just two (2) months, Equity Bank opened 670,000 accounts! Incredible!
Of course, there are certain restrictions and costs. The maximum amount for this M-Pesa transactions is Kschs35,000 or $448 at the current FX rate. The costs associated with a transaction, including sending and receiving, total approximately 1% of the amount. From the standpoint of the money supplying agents, including super-agents, sub-agents, aggregators, the effective yield on their money is several hundreds percent. It is not expressed in APR, so it is burried in the name of a "transaction fee" and it is acceptable to most Kenyans for the convenience that they enjoy.
Equity Bank is another phenominon that is sweeping the country. It has been growing 50% or more every year since 2004 when it went public. It has its own 300 branches, but it is operating through a network of more than 1,000 agents that are not branches. It is called "branchless" or "agent" banking. It offers only a few savings products, but it cannot deploy the funding fast enough, thus sitting on abundant cash that accounts for 48% of its deposits. This bank does not know nor have liquidity crunch. How do they do it?
The knowhow is to make the funds avilable readily beyond the traditional cash access points. It uses brick and mortar branches, ATMs, branchless agents, cell phone M-Pesa, etc. to make their clients (they call them their members) readily access their funds and do transactions easily. The bank carries an unbelievable amount of loyalty from their customers. And it is a new phenomenon. It is expanding to neighboring countries: Uganda, Sudan, Tanzania and next year Rwanda. It is a threat to many traditional banks, but a new way of access to financial services for many poor people in Africa.
The workshop included field visits to M-Pesa agents and presentations by M-Pesa, Equity Bank, PEP, one of the aggregators, and Top Image, the company that M-Pesa uses in providing on-going monitoring and training for the agents.
All in all, it was an enlightening story, a mind-shaking challenge and a wake-up call to the way microfinance or traditional banking is done in Africa or anywhere else in the world. The bright side is that the poor people are getting the help. Praise the Lord! - Jeffrey
Posted by jlee80111 at 5:27 AM