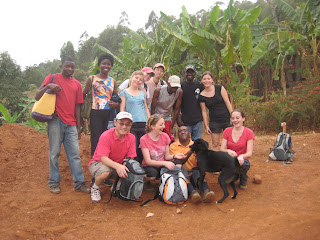 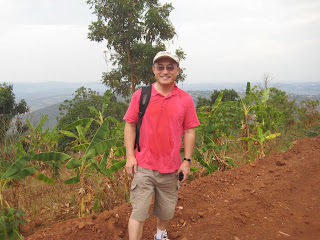 Today, I joined a group of Kigali hikers to hike the tallest mountain in the Kigali City: Mt. Jali. Mr. Jali is facing the second tallest mountain in Kigali, called Mt. Kigali. Mt. Jali is approximately 2,000 meters high and we started the hike from 1,300. I was told it would be a 4-hour hike. Initially, I thought I might be pushing myself too much with a 4-hour hike, but it ended up a 6-hour hike!!! I would not have dared to try had I known that it would be such a long hike.

The group was truly global. The group composed of 4 Rwandans, 3 Americans, 1 German, 2 Irish, 1 Japanese, 1 Kenyan and 1 French. Most looked like they were in their 20's and 30's. By age, I was an odd ball, but I survived and made it.
The initial ascent was tough. We had to climb for one and a half hour on the continuous uphills of 30-45 degree. I was running out of breath and my legs were too heavy to make steps. I was wondering if I would be able to make it. I felt disappointed at myself because I thought I was keeping myself up pretty well through daily exercises, but I felt was far from being shaped to handle this type of challenge. Moreover we were climbing the hills through a small village where many children were gathering and following us. More than 30 children were following up with many in bare feet. The steep hills seemed so easy to them as they were literally hopping up the hills. Wow...
I was the last in line along with another Rwandan lady who said she was a chain smoker and this is her first hike of this kind. I was struggling. I was disappointed.
When I was feeling so exhausted to make any further move, I learned that the steep ascent was coming to an end soon and the next hour would be a gradual ascent. What a relief it was...
We finally made it to the top and had a small picnic.
We then started descending the mountain, but through a different route. It took far longer than the original route, thus lengthening the hike time by almost two hours.
It was a great feeling that I was able to finish the hike along with the young people of 20's and 30's. I felt more confident that at least I could sustain the long walk. But, I realized that it would take a lot more work to be able to hike such steep hills.
This was a great beginning for a journey to prepare to hike the Mt. Kilimanjaro in 2011.
Everyone almost crawled the last one hour, but we were glad that we finished the hike. Hooray! - Jeffrey
Posted by jlee80111 at 9:47 PM