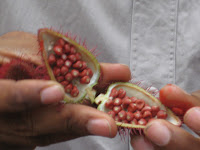 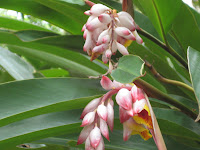 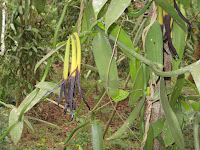 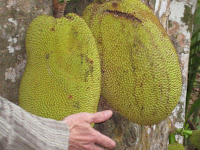 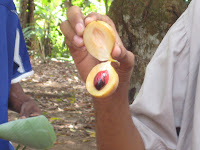 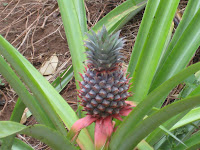 [From left to right: annatto used for making tandoori... vanilla.... cadarmon (another kind was the root) .... nutmeg...... pineapple...... jackfruits]
Zanzibar is known also for its spices. Based on the influence of the Indians, Zanzibar grew many kinds of spices. Now, it has slowed down quite a bit because of competition from Indonesia and other countries, but in the past, Zanzibar was the place for spices.
While we were in Zanzibar, we visited a spice farm and learned a little about various spices. Here are some examples: nutmeg, ginger, green (white, brown and black) pepper, vanilla, cinnamon, cardamon, green chilly, lemon grass, cloves, annatto (used for tandoori) etc. We also saw and tasted some interesting fruits, such as jackfruit, cocoa (derived from cacao tree), starfruit, pineapple.
Some of the findings were beyond my imagination. For example, until I saw the vanilla tree in Zanzibar, I thought the vanila was a beige color, because of, I suppose, the vanilla icecream. (Please excuse my ignorance.) But the vanilla was made from vanilla pods that are black. Vanilla is known to be the second most expensive spice, behind saffron because of the expensive vanilla plant and manual labor costs for pollination.
Also, I learned that cinnamon is made primarily of the tree's barks and leaves, not fruits or roots. The cinnamon sticks are made of the dried tree barks. If you dry the bark slices, they naturally roll into the sticks. After the barks are cut out, the barks grow again and can be harvested again and again.
The most interesting to me was the jackfruit. As we walked in the farm, we came to a tree that had huge fruits with rugged skins, the sizes of watermelons, hanging on the branches. Usually, big fruits like this grow on the ground, I thought. But, jackfruits were growing up in the air handing from the branches. The taste was quite unusual. I would not say it was sweet, but it was in between pineapple and watermelon. - Jeffrey
Posted by jlee80111 at 7:19 PM