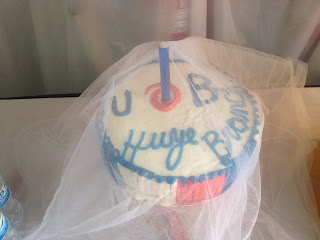 On April 5th, we held the grand opening ceremony of UOB's Huye Branch. It was the newest branch and 43rd business outlet.

Unlike the past ceremonies, this ceremony was rather short and sweet. Since it is located on the first floor from the ground (European way) we did not have a big space to put out the tents and hold the traditional dancing. We all stood and held the ceremony standing. The Huye District Mayor, the RDF Regional Commander and the Police Chief all attended and congratulated us on the opening.

Although the space was limited and the ceremony was short, the promotional impact was even greater than before. It was because the Police allowed us to use speakers on both sides of the building, broadcasting the ceremony including the congratulatory remarks. Moreover, a handful of radio station anchors whom we hired carried out the program playing UOB's jingle that is playful.

After the ceremony, we held the usual parade with a half dozen blade riders, 30 motorcycle riders and UOB's mobile branch. The famous female anchor Anita was on a truck promoting the bank. She is well known to most Rwandans who listen to radios all the time. Many people said that they did not know Anita was so young and so skinny. Her deep voice tends to make people believe she is older and bigger than she is.

The impact was tremendous. We opened 35 accounts on the day and 25 accounts the following day. Our affordable account features and three ways of accessing the account (branches, cell phone and card) must be attractive to the clients. UOB's savings account has no minimum balance to open and no maintenance fee. Indeed it is for all Rwandans as the bank's slogan indicates: i.e. Banki ya bose or Bank for All.

It is our prayer that Rwandans in the Huye area may also benefit from these services without the cost. We are grateful for the success we have so far achieved with the branch. May we continue to receive your favor, Lord. - Jeffrey