On Friday, November 9th, UOB officially opened its ninth branch in Ngoma District, Eastern Province. It was drizzling but the grand opening ceremony was attended by all local officials and many spectators. In Rwanda, it is common to invite Rwandan traditional dancers to celebrate the event after formal speeches, such as opening prayer, welcoming remarks, congratulatory speech, thanksgiving response etc. 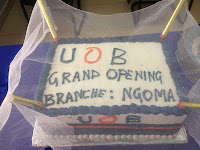 The cake was lit and cut by a group of us together with the District official. 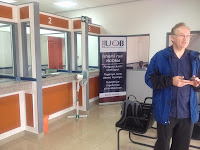 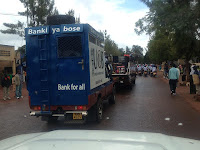 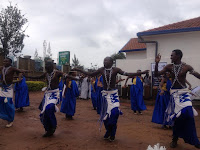 After the ceremony, there was a parade in Ngoma town. The parade included UOB's mobile branch, a truck carrying Anita, one of Rwanda's famous and popular radio anchors, 25-30 motorcycle riders wearing UOB T-shirts and a dozen roller blade riders, all wearing UOB T-shirts. It has been UOB's tradition to mobilize these people to let the town people know we are now there to serve the clients. Anita was a young and slim lady and many Rwandans were surprised to find out how young and slim she was. Her radio voice made many people believe she was a middle aged woman.

I had to come back right after the ceremony but I learned that the parade drew a lot of attention from the town people.

May the Lord bless us with His divine wisdom to find out the best ways to serve the Rwandans in the Ngoma area. This branch will also be used as a hub for satellite branches, credit offices and branchless agents in the area and neighboring districts. - Jeffrey
Posted by jlee80111 at 10:23 PM